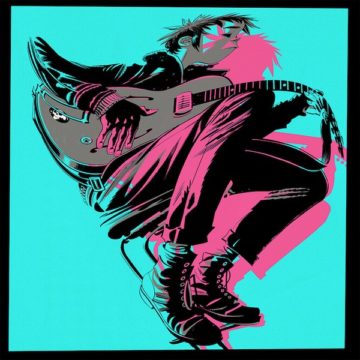 Your favourite cartoon ensemble that makes up the Gorillaz is back at it again with a new album, The Now Now, and although it’s not as courageous as previous releases, it’s a much-needed collection of fun-loving tunes.

The same poeticism that has been seen on previous albums is apparent throughout as writer Damon Albarn creates a less-than-serious album with illustrator Jamie Hewlett still on the drawing board.

With a clean sound, using playful pysch-pop, disco and their typical touch of funk, The Now Now is a highly listenable album. With not much in the way of musical ambition, this album was created for pure entertainment and with its entertainment factor throughout, there’s nothing wrong with that.

Each note on the synth and strum of the bass are finely-calibrated and designed to take the Gorillaz signature way of creating unique music all the while leaving it uncomplicated. The same great soothing vocals combined with the catchy lyrics make it hard to not bounce along to the beat of this album.

With today’s political and societal climate, this particular album couldn’t have come at a better time. All 11 tracks are designed as an ode — not to ignore the horrors going in the world — but to find joy in between the madness.

The album opens with “Humility”, an upbeat and eclectic tune appearing to be about the simplistic loneliness of heartbreak. No more and no less. The only song with collaborating artists, “Hollywood”, the Gorillaz, Snoop Dogg and Jamie Principle take the lavish lifestyle of celebrity and humble brag through a deftly-produced rhythm of synth and bass.

The slow chill that is “Fire Flies” offers a smooth ride through a strong story of heartbreak with its metaphorical lyrical stylings and harmonic melody. There are no true standouts on the album, but that’s not to say it’s a bad album. Quite the opposite, in the way that the whole album will bring a cheer and escape back into childlike joy and musical entertainment.

The humble attempt at creating a downplayed album full of hit tunes wasn’t missed by Damon Albarn, and its simplistic absurdity is what makes The Now Now a must-listen for fans and non-fans alike.

Angelica is a Freelance Writer based in Toronto, ON. Her passion for music started at a young age when she received a guitar for her birthday, and it has taken over her life in the best possible way ever since. When she’s not searching for additions to her vinyl collection, discovering new upcoming bands on Spotify, or attending any live show she can get tickets to, she can be found in her room jamming on her guitar.
RELATED ARTICLES
album reviewalbum reviewsgorillaz
8.0