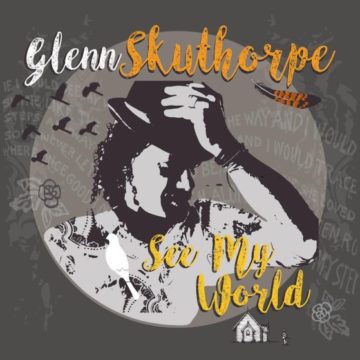 This is album number five from the remarkable Nhunggabarra, Kooma, Muruwari artist (his definition).. If I was honest I would say the first time I listened to this album I was not all that impressed.  I left and came back to it, perhaps in a very different mind set, because listening to this album a second, third, fourth, and fifth time,  I was blown away.  Actually on second spin I was blown away, the other times were just to confirm what I already knew.  This album should be on turntables the world over.  Blues, Cajun, Rock, Roots music all combined by one incredibly talented and extremely hardworking musician.

Skuthorpe is a story teller, and the stories are augmented by one hot band.  Producer Steve Francis has put together a band that knows how to give Skuthorpe his space, both for his vocals and his guitar.  His stories come across with pathos, longing, and the pain in which he is expressing.  Clare O’Mera adds the right amount of fiddle and accordion.  The music is almost dependent upon this incredible fiddle playing. Ann Metry adds tasteful bass, and Kerri Simpson provides some chilling background vocals.  It all mixes together so beautifully.

The album even features Canadian Matt Patershuk, whom Skuthorpe met while touring Canada in 2015. This man has an ear for musicians, and he has a clear understanding of what works.  His back-up band works remarkably well together.

Although he is a brilliant guitarist and knows his way around classic blues licks, his voice stands out.  He taps into the classic country singers, and classic rock vocalists.  He carves out his own voice and his own style but you know this guy has grown up listening and absorbing all that is around him.

The album feels like a throwback to the way albums used to be made.  Listen to the sax (courtesy of Martha Baartz) during “Sins of My Ways”.  It comes right out of classic Levon Helm albums circa 1978.  This is a good thing, as that sound is missed these days.

Skuthorpe has no interest in “new country” or “country pop”.  He has his own sound, his own style and he is more than happy to exploit what he does well.  He writes strong, emotional, story telling lyrics, and backs them up with a tight band and tight guitar sound.

A brilliant album that he funded from a crowd surfing campaign, and one that in a just world would be on the radio and your turntable.

Born and raised in Whitby, Aaron discovered music through his love of The Beatles. This led to a career in radio, writing for various publications, and ultimately a radio show about The Beatles (Beatles Universe), which ran for over four years. When not immersed in music, Aaron enjoys spending time with the loves of his life -- his wife Andrea, and daughters Emily and Linda (all of whom have an intense love of music too).
RELATED ARTICLES
album reviewssunday morning
7.0