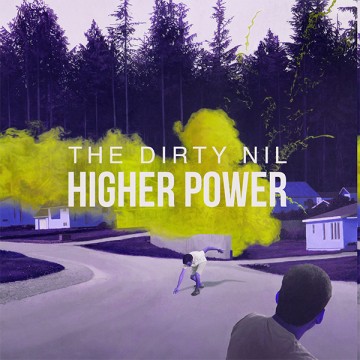 For the better part of a decade, The Dirty Nil has been chipping away a monolith of a rock band. They’ve been patiently releasing 7” singles, an EP, and an ongoing fan club exclusive series of singles and covers. They’ve cut their teeth touring across Canada and the U.S., hitting up every shithole DIY space and festival slot they can get their hands on and generally working their asses off to become one of the best honest-to-god rock ‘n’ roll bands in the country.

The band’s first full length, Higher Power, captures the confidence and charisma of a young Marlon Brando and the appearance and smell of a present day Macaulay Culkin. It’s pretty scuzzy, but boy does it ever rip.

Although vocalist/guitarist Luke Bentham’s mucuosy wail is the hallmark of the band’s sound, what makes Higher Power that much better is vocalist/bassist Dave Nardi’s atonal snarl. Nardi is Nick Oliveri to Bentham’s Josh Homme. Standouts like “Lowlives” and “Fugue State” are the album’s “Tension Head” and “Six Shooter,” and allow the trio to flex a different set of muscles.

There’s a few older tracks that were re-recorded for Higher Power (“Zombie Eyed,” “Wrestle Yü To Hüsker Dü” and “Bruto Bloody Bruto” have all appeared on previous releases), but they could have easily released a singles compilation, slapped a major indie label’s name on it and called it a day, as all of these tracks are just as vitriolic, anthemic and charming as ever.

And that’s not to say the new material doesn’t measure up. Drummer Kyle Fisher pounds his way through the wonderfully dynamic “Know Your Rodent,” and “Helium Dreamer” is an interesting venture into post-hardcore dysphoria, ostensibly a nod to co-producer Shehzaad Jiwani’s band, Greys.

According to the that band’s website, The Dirty Nil writes music “for dive bars and house parties – for beer drinking and joint smoking – for road trips and barbecues” which makes sense, because this record is weekend warrior music, through and through. Higher Power is Bob Seger, Ray-Bans and Tom Cruise sliding around his parents’ house in his underwear for millennials, celebratory rock that doesn’t want to have to deal with Monday right now.

Marko Woloshyn is a Mississauga-based writer and musician. He owns a limited edition repressing of Mclusky Do Dallas and one time at a concert a drunk woman told him he looked like Keira Knightley.
RELATED ARTICLES
album reviewsdine alone recordshigher power
8.0