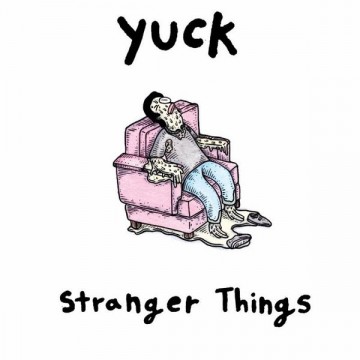 Breaking up is hard to do.

After the success of Yuck’s eponymous first record in 2011, founding member Daniel Blumberg left the band, leaving the young English quartet stripped of their leader and their momentum. Seeing no other option, the band trucked on, and wrote, recorded and toured behind their second album, Glow and Behold followed by their Southern Skies EP. Both Glow and Behold and Southern Skies illustrated a band going through some growing pains: reassigning roles, adding a new member and discovering a new dynamic within the band.

While those releases served as a cast allowing the band to regroup, Yuck’s third full length, Stranger Things, shows a once broken bone now completely healed and calcified as a stronger, confident unit.

Album opener “Hold Me Closer” wastes no time making an impression and bears a striking resemblance to Built To Spill’s “Car” with vocalist Max Bloom’s fuzzed out howl standing in for Doug Martsch’s fragile, heartfelt squeak. More importantly, the guitars are easily just as anthemic as they were back in 2011 on “Get Away.”

The band maintains the momentum of “Hold Me Closer” with the punky “Cannonball.”
“Cannonball” is another example of Yuck doing what Yuck does best – Blumberg or no Blumberg – taking the best parts of their favourite ‘90s indie rock bands and tactfully slapping them together. In this experiment, guitarist Edward Hayes and drummer Jonathan Rogoff blend Jay Mascis’ ripping leads over Steve Shelley’s relentless tom work with remarkable results.

Stranger Things is a fun, lighthearted record, with some hopeful, cathartic lyrics.
“I’m OK” is a catchy little waltz about Bloom’s struggles with anxiety, that crescendos into a lush coda that could give hope to any jilted Weezer fan.

The record was written and recorded slowly and inexpensively at both the band’s London rehearsal space and Bloom’s bedroom – where they tracked the songs on their first release. And some of their old trademarks are back: slouchy guitars that sink from one note to another populate the album’s gentler standout tracks like “Like a Moth” and “Down.”

Though the band never achieves the same level of mope they did with “Suicide Policeman” – except maybe in the title track’s chorus, because there’s no better miserable bastard mantra than “I hate myself” – but that’s okay. Sonically, Stranger Things is a celebratory record that shows a matured band entering the second act of their career, one free of asterisks.

Marko Woloshyn is a Mississauga-based writer and musician. He owns a limited edition repressing of Mclusky Do Dallas and one time at a concert a drunk woman told him he looked like Keira Knightley.
RELATED ARTICLES
album reviewscannonballhearts in motion
9.0