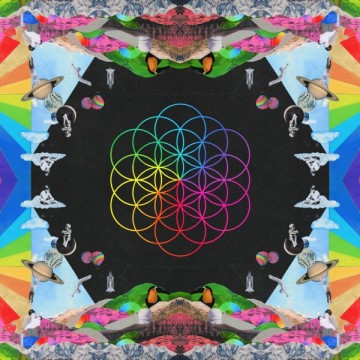 Whereas Coldplay’s sixth album Ghost Stories dealt with themes of regret, wondering what might have been and promising unconditional love to those that have come and slipped away, this British quartet’s latest release is distinctly upbeat and full of wonderful energy. Coldplay has found love again and is declaring it to the world.

A Head Full of Dreams’ first single, “Adventure of a Lifetime” embodies the spirit lifting euphoria of finding new love and it’s hard not to feel alive again listening to this disco-themed track.

Lead vocalist Chris Martin sings, “I’m never so high as when I’m with you” on a potential anthem, “Army of One” before leading into a very funky, hip-hop hidden track entitled “X Marks the Spot”.

Even slower pieces such as “Everglow” and “Amazing Day” display a playfulness and charm unlike past mournful and heart-wrenching songs such as a “Fix You”.

Several of the songs on A Head Full of Dreams were performed live at both the Global Citizen Festival in New York City (fans may have noticed the “flower of life” design on Martin’s t-shirt at the show as well) and on the entertainment program TFI Friday in Los Angeles prior to the release of this album.

Recorded in both the United States and England, A Head Full of Dreams, features notable contributing artists such as Beyonce and Noel Gallagher. A snippet of Barack Obama singing Amazing Grace is also included in “Kaleidoscope”.

Might this be Coldplay’s final collaboration as alluded to during an interview with BBC’s Zane Lowe? If so, Coldplay has let us know that they have no regrets. They may have found and lost love, but they are going to dance into the sunset.

JUST ANNOUNCED:  Coldplay will be playing the 2016 Superbowl halftime show on Feb 7 at Levi’s Stadium in Sacramento CA.

An educator who also tries to introduce others to great music. It's a never ending job.
RELATED ARTICLES
a head full of dreamsadventure of a lifetimealbum reviews

by SPILL NEWS on October 23, 2018
COLDPLAY TO RELEASE LIVE ALBUM & CONCERT FILM TO ACCOMPANY NEW DOCUMENTARY DVD ON DECEMBER 7 On December 7, Coldplay will [...]