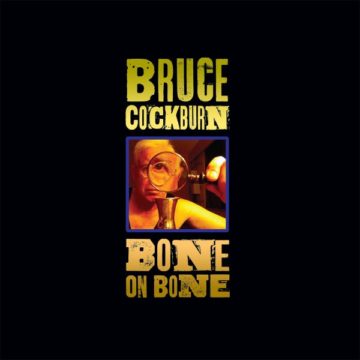 Bone on Bone is Bruce Cockburn’s 33rd album and his first studio  album since 2011’s Small Source of Comfort. Cockburn has not mellowed in those years. He is still producing his brand of folk/protest music. The songs may be a bit more personal these days, but from the opening track, “States I’m In” until the last track, “Twelve Gates To The City”, Cockburn is seriously angry about a lot of things, but this is balanced with his invitation to love. Make no mistake, he uses his music to express his opinions and his observations. But then, this is nothing new from Cockburn.

His voice may be a little rougher at times, (he is 72 years old) he still sounds great. He uses his voice to full effect, much in the same way folk artists of the past have used their voice as an instrument to express not only the words but the emotion/feeling of the song. Listen to “Stab At Matter” as an excellent example of this form of singing. His voice is his instrument. Joining Cockburn on this song is San Francisco Lighthouse Chorus, who are members of the Church Cockburns attends.

Although the album has some intense anger, there is a heavy spiritual element to the record. Not so much religious but definitely spiritual. Cockburn is searching for answers and maybe comfort and his spiritual beliefs may be one way to accomplish this search and direct him to answers. “Feel a hand upon my shoulder, saying brother climb aboard I’m on The Jesus Train” he sings in “The Jesus Train”. A brave statement in these days when such sentiment is frowned upon. Cockburn stands by his conviction and to be honest it is quite refreshing.

Cockburn is joined by many guests on this album, singer-songwriters Ruby Amanfu, Mary Gauthier, Brandon Robert Young, bassist Roberto Occhipinti, and Julie Wolf, who plays accordion on one of the highlights of the album, “3 Al Purdys” Ron Miles also makes an appearance playing some pretty mean flugelhorn. The album is produced by longtime collaborator Colin Linden, who knows how to get the best from Cockburn. Cockburn’s nephew, John Aaron Cockburn chimes in with accordion as well. But the core band of the album is Cockburn, John Dymmond (bass)  and Gary Craig (drums).

Cockburn has developed his own distinct guitar playing and on this album he is in top form. His guitar playing has not diminished over time, quite the opposite. He plays beautifully and the music is not only accessible, but quite memorable as well.

Cockburn is a craftsman, and this is a great addition to his catalog. The album is what one would expect from Bruce Cockburn, and there is nothing wrong with that. Some of the songs work better than others, and at times he does pound the message, but overall an interesting album  Fans will enjoy Bone on Bone and it may attract others.

Born and raised in Whitby, Aaron discovered music through his love of The Beatles. This led to a career in radio, writing for various publications, and ultimately a radio show about The Beatles (Beatles Universe), which ran for over four years. When not immersed in music, Aaron enjoys spending time with the loves of his life -- his wife Andrea, and daughters Emily and Linda (all of whom have an intense love of music too).
RELATED ARTICLES
album reviewsbruce cockburnstates i'm in
8.0