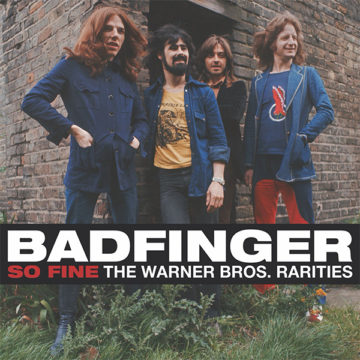 Badfinger is best known for its hits on The Beatles’ Apple Records in the early 1970s, and perhaps for “Baby Blue”, which closed out the final episode of Breaking Bad.  But following their four albums (five if you count the album when they were known as The Iveys), Badfinger left Apple and signed to Warner Brothers Records where they released two albums, Badfinger and Wish You Were Here. Both albums were criminally neglected at the time of their release. They did record a third album for Warner Brothers, Head First, was not released until many years late, but that is another story.

The two Warner Brothers albums have been in and out of print for years, and not always easy to  find. This was a shame, as they are both brilliant albums. The good folks at Real Gone Music rereleased the albums in late 2018, complete with bonus tracks. So Fine – The Warner Bros. Rarities is a compilation of some of the bonus tracks for those albums. It is a double album, rereleased for Record Store Day.

So Fine – The Warner Bros. Rarities is a brilliant compilation as it does show a different side of Badfinger, sometimes a more stripped down sound (“Island (Work In Progress”) and other times

their songs have a different feel from the officially released version (“In The Meantime (Alternate Mix)”). Other songs featuring the band experimenting, such as the painfully beautiful “Got To Get Out Of Here (Alternate Mix) with the addition of horns, and it works. When the songs are heard alongside the original album, they have less of an impact as opposed to being heard on their own. As bonus tracks, it is far too easy to compare them to the oiginally released version. Here, on their own, they form their own album and the need to compare the songs seems to not matter.

Of course the previously unreleased songs are here as well. “Queen Of Darkness” is a mystery. Why they did not finish it and release it is beyond me. It is a typical Badfinger power pop song, with some inspired guitaring from Pete Ham. “Love My Lady” is also quite good, a slow, bluesy rock song that would have been a welcome addition to either of the two albums.

This is an extremely well put together compilation. A great deal of work has gone into the remastering/mixing of the songs. The two-album set has a great deal of information and great care was taken in putting this together.  So Fine – The Warner Bros. Rarities is a welcome addition to any Badfinger collection. Forget the tragic story, forget that three quarters of the band are no longer with us, and just enjoy their beautiful, stunning music. Just never forget Badfinger.

Born and raised in Whitby, Aaron discovered music through his love of The Beatles. This led to a career in radio, writing for various publications, and ultimately a radio show about The Beatles (Beatles Universe), which ran for over four years. When not immersed in music, Aaron enjoys spending time with the loves of his life -- his wife Andrea, and daughters Emily and Linda (all of whom have an intense love of music too).
RELATED ARTICLES
album reviewalbum reviewsbadfinger
9.0