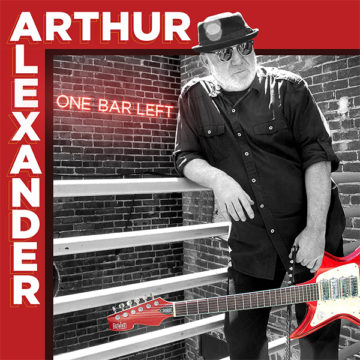 Arthur Alexander formed Sorrows in 1977 in New York City. They released two solid, now classic power pop albums, then promptly broke up. He resurfaced on the revered Bomp record label with another band, The Poppees and that band  left the music world with some classic singles, which were later gathered together on a very thorough CD compilation. And now, in 2018, he is back, with his solo debut album, One Bar Left.

Alexander has gone back to his power pop roots and produced a very listenable album. This is music from a bygone era, but it sounds so refreshing and brilliant to 2018 ears. Melodies, harmonies, guitar based rock/pop. He does it all on this album. The album holds together, while Alexander pays tribute to his influences. They are all here, The  Beatles, The Rolling  Stones, Phil Spector’s  Wall of Sound and New York punk, circa 1976. At times he even summons the ghost of Tonio K.

Alexander revisits some of his older material and has written some new songs for the collection, he even does an energized cover of Sam Cooke’s “Bring It On Home To Me”, which has elements of solo George Harrison and then tears into a crazy guitar solo, that is pure Alexander.  The album is not so much dated as the sound and the music harken a different time, and listening to this album, one forgets how much this music is missed.

He gets help from members of Sorrows, Wojtek Pilichowski Band, Prima Donna, Dr. Boogie and The Blessings, but it is clearly Alexander’s show. He is the star attraction, as he should be. He is at his best with the twangy ballads (“It’s You”) or when he focuses on melody (“Psycho-Automatic”).

It is a solid album. It is a bit too long (17 tracks on the CD) but when all is said and done, it is fun to listen to and it is a welcome return of Alexander.