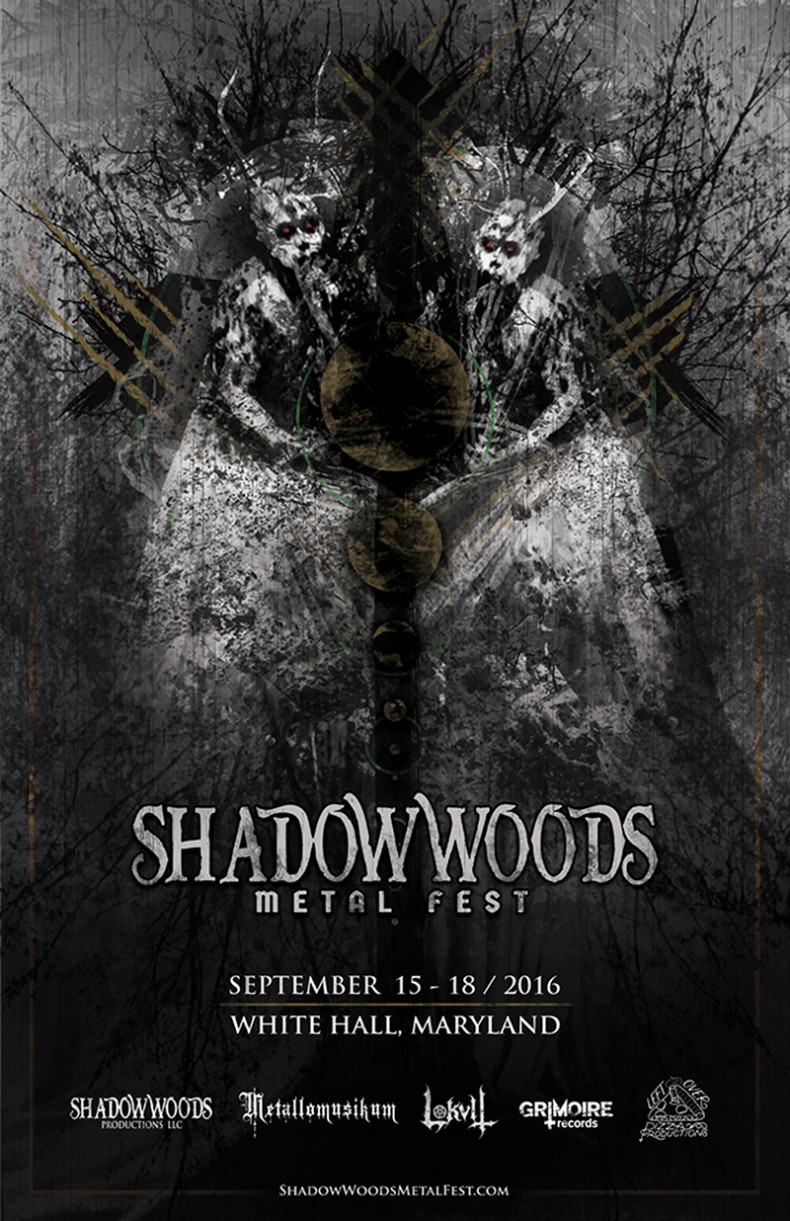 SHADOW WOODS METAL FEST, the Mid-Atlantic’s open-air camping metal party, is pleased to announce the complete lineup for the 2016 festival, which runs from Thursday, September 15th through Sunday, September 18th at Camp Hidden Valley, in White Hall, Maryland. This year, forty metal bands, representing diverse subgenres, will terrorize three stages in the woodlands of The Old Line State at the same summer camp where the fest was held last year.

The promoters of SHADOW WOODS METAL FEST have issued several new trailers for the gala, including a long-form version with tons of highlights from last year’s maiden installment and more posted below (a more succinct version can be found HERE).

“We are honored and humbled that all these great acts have agreed to play our little gathering in the woods,” says festival founder Mary Spiro of Metallomusikum.com/Shadow Woods Productions LLC. “Our team has worked diligently to bring these groups to our unique performance environment, and we cannot wait to see how the weekend unfolds. This lineup stays true to the fest’s mission of showcasing the bands that metal fans ought to be seeing and hearing, not simply the bands that everyone has already seen somewhere else.”

This year’s lineup also boasts several acts that have never performed on the East Coast, such as the blackened space-rock pair LOTUS THIEF from San Francisco, which features Otrebor of Botanist on drums, and Colorado’s HELLEBORUS, powered by the Houseman brothers (Akhenaten; ex-Execration), who specialize in psychedelic black metal tinged with sexual mysticism. The complete lineup (listed below) surpasses the ferocity of the fest’s inaugural installment in both diversity and scope of metal styles.

Attendees will be able to munch of a plethora of food choices throughout the weekend including the return of the high octane Zeke’s Coffee and vegan selections from Headbangin’ Hotdogs, among several others. Jewelry, knitted-wear, art, CDs, vinyl, t-shirts and more will be on sale in the festival’s long hall. Yoga sessions will again be held each morning for those willing to brave a downward dog with a hangover. Other workshops are to be announced. The fest is BYOB and is 21 and up only. Those interested in vending, teaching a free workshop or who have specific questions should send an email with a description of your products and a website link to [email protected]

Weekend Passes for SHADOW WOODS METAL FEST are available for $130 at BrownPaperTickets.com. Tent camping is included with the weekend pass. People who want to reserve cabin beds can do so for an additional $20 for the duration of the fest. Only 400 weekend passes will be available and about one-third have sold so far. A limited number of day passes will go on sale in August.

by SPILL NEWS on January 29, 2023
RICKIE LEE JONES NEVER DID FOLLOW THE RULES PIECES OF TREASURE OUT APRIL 28 (BMG MODERN) The mood is jazz. The icon is Rickie Lee Jones. The voice just keeps getting better. Rickie Lee Jones’ latest album Pieces of Treasure (BMG Modern) is a [...]