SPILL NEWS: HOLY SONS REISSUE ‘DECLINE OF THE WEST’ – OUT DEC 4 ON PARTISAN 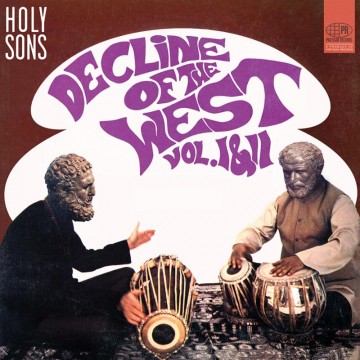 Ten years ago the only way you could get your hands on Decline of the West was either as an Italian import CD or one of 300 vinyl copies issued from a microscopic Atlanta label. Now Holy Sons’ most beloved release, Partisan Records is reissuing the disc as a double LP that includes the bonus tracks from the 2008 expanded edition and 7 BRAND NEW songs from the original album sessions that have never seen release. Each piece of it has seen Amos’ personal touch, down to the collaged album art on the gatefold package.

Decline of the West is named after, and conceptually began with, Oswald Spengler’s pessimistic assessment that the Western culture is showing the classic signs of a society’s decay and end. It is a genre-bending album that resides in the intersection of folk and punk, striving to be music of and for the People. The album is also a touchstone for Amos’ career, the most well-known of his eleven (or possibly more) releases as Holy Sons.
Recorded at Amos’ Portland, OR home studio in late-night recording sessions during which he played every instrument, the creative process eventually stretched over three years. He methodically deconstructed the album, re-mixing and re-editing in order, Amos says, “to unseat a lot of the tired/old ideas behind how a ‘singer-songwriter’ record is supposed to sound.”
“I wanted to represent a much more unique & apocalyptic vision,” he continues, “than the more-pacified & depressed folk sound of my previous album (‘I Want to Live a Peaceful Life,’ 2003, FILMguerrero).”
Pulling from many traditions – jazz (syncopated timings), hardcore (discordant aggression), musique concrete (spoken word samples from other media), electronica and Jamaican dub (cut and paste sampling, melodica solos); the album is a melting pot mixed by Amos’ hand. The cover songs on the album, ranging from Circle Jerks to Billy Joe Royal point at Amos’ personal influences and ethos.
Amos has said, “Holy Sons is about facing your personal reality. You can’t wear it, it’s not cool, so it’s not a commodity in this culture. I don’t think it’s built to succeed in any way.” And yet, despite not being built for success, this record has connected with people. Its powerful message about the world that is slowly falling apart around us has resonated powerfully and continues to turn on new listeners to the truth, one play at a time.
Decline of the West Vol. I & II
(Deluxe Reissue)
December 4, 2015
Partisan Records
Track List:
Gnostic Device
The Feral Kid
Saccharine Trust
Slave Morality
Level Anything (Sebadoh cover)
Kindred Spirit
More Noise Pollution
Satanic Androids
Evil Falls
Bleakest Picture
Nothing Left (Daniel Johnston cover)
Things You Do While Waiting for the Apocalypse
Nature’s Way (Randy California cover)
My Graveyard
Down in the Boondocks (Joe South cover)
Let Me Give Up II
Beverly Hills (Circle Jerks cover)
Accept the Truth!
I’m Healed
More Therapy
No Claws
Song from the Conscience
Last Wave
Holy Sons Tour Dates:

SPILL NEWS strives to keep our readers up to date with news and events in the music industry. We keep you informed of the most recent information regarding new releases, tour dates, and information items about your favourite artists.
RELATED ARTICLES
newspartisan records