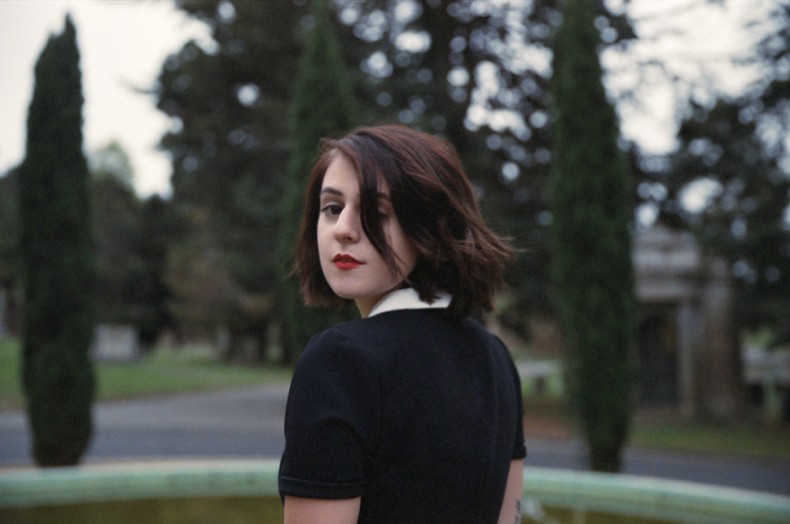 Polyvinyl Records and Tancred are thrilled to debut, “Bed Case”, the latest single off Out of the Garden, the forthcoming April 1st LP from the talented musician and songwriter also known as Jess Abbott. Produced by That Dog’s Anna Waronker and Off!/Redd Kross member Steven McDonald, Out of the Garden is Tancred’s first truly cohesive record: a mission statement that underscores the “power” in power-pop and is punctuated by lyrics as razor-sharp as the hooks.

Written over a two-year period during a break from touring, Out of the Garden’s emphasis on re-defining feminine expectations was shaped by primary songwriter Jess Abbott’s experiences living in Minneapolis and working at a liquor store in a rough part of town. “I learned how to speak up when I needed to and how to truly be myself without reservation,” Abbott recalls. “I felt afraid walking home at night, and after a couple of months I just got sick of it and started getting into self-defense and self-empowerment as a means of coping. Finding my own strength changed everything.”

After writing and tracking every song in her apartment, Abbott (also of beloved Minneapolis trio Now, Now) enlisted Kevin Medina and Terrence Vitali to add drums and bass to her demos. The band then traveled to LA to record with McDonald and Waronker. Both producers proved to be the perfect collaborators, with each elevating the final takes via their specific areas of expertise – Waronker helped Abbott achieve the raw vocal attitude exhibited on songs like the seething “Hang Me,” while McDonald orchestrated the tailor-made guitar tones and trashy drum sounds highlighted on standouts like “Joey.”

As a result, Out of the Garden showcases Tancred shedding its former skin in favor of a bolder and infinitely more confident sound. As Abbott reveals, “I wanted these songs to sound sickly sweet, with a looming, gory shadow behind them. Sugary, but when listening closely, unsettling.” Her fearlessness to delve into darker subject matter and other personal topics on Out of the Garden is referenced in the album’s title, an allusion to exiting Eden and leaving behind all the restrictive cultural norms ingrained in the Biblical “paradise”: tradition, purity, holiness, binary gender, heterosexuality, and the idea that anything is forbidden (especially for women). Says Abbott, “Out of the Garden represents doing what you want, what you need, without letting anything or anyone stop you — and smiling while you do it.”

Tancred
Out Of The Garden
(Polyvinyl Records)
Release Date: April 1, 2016

SPILL NEW MUSIC strives to keep our readers up-to-date with new releases by your favourite artists, keeping you informed of new album, single, and video releases. Stay tuned -- who knows, you might just discover your new favourite band.
RELATED ARTICLES
new musicout of the gardenpolyvinyl records