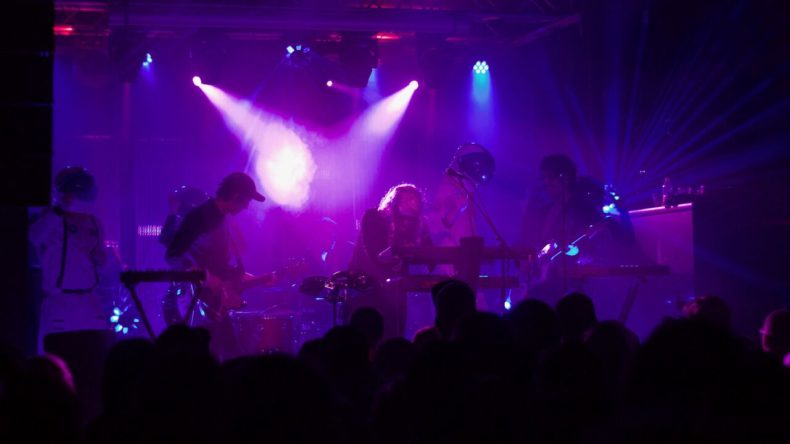 For their first trip to Edmonton, STRFKR brought an energetic show, striking lights, and their label mates Psychic Twin.

In the early hours of the evening, Psychic Twin began their set for a loosely packed Needle Vinyl Tavern. Psychic Twin is the immensely personal musical project of Erin Fein. For her tour in support of her album, Strange Diary, Fein has brought along drummer Rosana Caban. They perform many synthesizer and percussion parts live while being backed by additional premade tracks. Being signed to Polyvinyl Records, Psychic Twin and STRFKR have crossed paths before initiating a tour. On Polyvinyl Plays Polyvinyl, Polyvinyl’s anniversary celebration album, Psychic Twin performs a cover of STRFKR’s “While I’m Alive”. After performing their duties as an opening band Psychic twin returned to the stage having donned astronaut helmets and danced alongside STRFKR.

Edmonton is the third furthest north that STRFKR has played. As this was their first excursion to the city many fans energized the hall with buzzing anticipation. STRFKR’s performance featured many of their established hallmarks including founder Joshua Hodges dressed in drag, animated LED panels, and astronaut antics. Their synth-laden stage was a dynamic and engaging sight. Midway through their setlist Hodges and drummer Keil Corcoran switched places yet their harmonic sound remained largely unchanged. Instrumentalists Shawn Glassford and Patrick Morris also showed versatility as they frequently varied their instruments for the ever changing songs. STRFKR’s electronic sound was nicely complimented by electric lights which filled the stage as they stormed through their set. Even though their current tour is in support of their latest release, Being No One, Going Nowhere, their set was composed of many songs from their past releases including a cover of “Girls Just Want to Have Fun”.

After completing their encore members of STRFKR made their way towards the merch table to meet fans and decompress after introducing themselves to Edmonton. Despite an impromptu fire alarm, Psychic Twin and STRFKR provided an evening of energetic entertainment.

I am an Edmonton based musicophile and photographer who loves experiencing music whether it's live or on my turntable. I play seven instruments and go to a lot of concerts.
RELATED ARTICLES
live reviewstrfkr