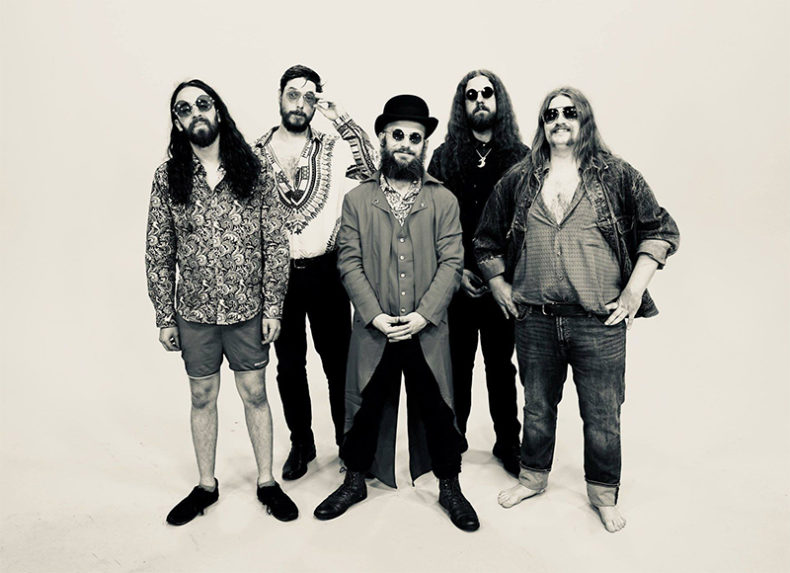 Connoisseurs of the metal scene were nearly unanimous in their appreciation of Pennsylvania’s Rivers of Nihil’s latest release Where Owls Know My Name. Demonstrating an evolutionary step forward from previous releases and a technical proficiency rarely seen even in the technical metal genre across all instruments, when the chance arose for this reviewer to hear the band on their current tour performing the album in full, there wasn’t a moment’s hesitation. But would the band be able to match the studio proficiency live, complete with a guest saxophone touring member (Patrick Corona from Cyborg Octopus)?

Bay area blackened metal Wolf King is opening on this tour, and as the crowd filtered in played with enthusiasm cuts from 2018’s Loyal to the Soil to a positive reception. Great Britain’s Conjurer’s unique brand of riff-based sludge metal followed with Dan Nightingale and Brady Deeprose handling guitar and vocal duties jointly and were well received.

By the time Entheos took the stage, the crowd had filled the small venue to see Des Moines’ own Chaney Crabb deliver their new Dark Future release in full. While much was made of their longtime bassist Evan Brewer’s  departure in early 2019, Agamemnon’s Tim Walker was an absolute revelation. Chaney’s joy in playing for her hometown audience was a beautiful thing to witness and it was great to see a metal vocalist daring to smile around barking her guttural delivery typical for the genre.

Rivers of Nihil took the stage to ‘Cancer/Moonspeak’ and firmly in the front row, Vaudeville’s low, barrierless stage meant I was inches from the band. Jake Diffenbach whisper/screamed the line ‘Why don’t you sing to me a song of sanctuary?’ from the track ‘Home’ with his mouth to my ear and that moment made me realize how amazingly intimate a night I was experiencing.

Certainly the presence of the saxophone on WOKMN was an oft-mentioned facet, as rare and frankly courageous move even by progressive metal standards. The sublime part of the inclusion live was that Patrick Corona’s playing was stellar, not at all mere ornamentation, but augmented every song on which he made his way from the sidestage to play. Adam Biggs’ proficiency on the bass and on the clean vocals was beyond reproach, as was Brody Uttley and Jon Topore’s mastery of 7-string guitars.  Guitar tones went from Meshuggah-style djent to David Gilmouresque mellow overdrive and the end effect is a total eargasm. Perhaps the most amazing thing about seeing this band live is how musicians of this caliber manage to play together (it feels remiss to mention Jared Klein’s powerful drumming and ability to switch from raw power to emotive softer percussion fluently) without any member getting the short shrift.

Following the conclusion of the entirety of WOKMN, two other tracks followed with ‘Sand Baptism’ being the closer. This is a metal bill that can’t be missed.  This is a unique chance to see one of the absolute best metal albums released this decade performed in its entirety that in all likelihood will never happen again after this tour, and with quality openers that each should be headlining their own tours in coming years if there is any justice. More than just the owls need to know the name Rivers of Nihil.

Wayne grew up in southwestern Virginia on a steady diet of country music before graduating to the Clash, Danzig, Fugazi and the indie and grunge scenes in the 1990s. He lives for live music and writes for Spill as a backup plan in case Trump wins re-election and he needs some Canadian connections.
RELATED ARTICLES
live review