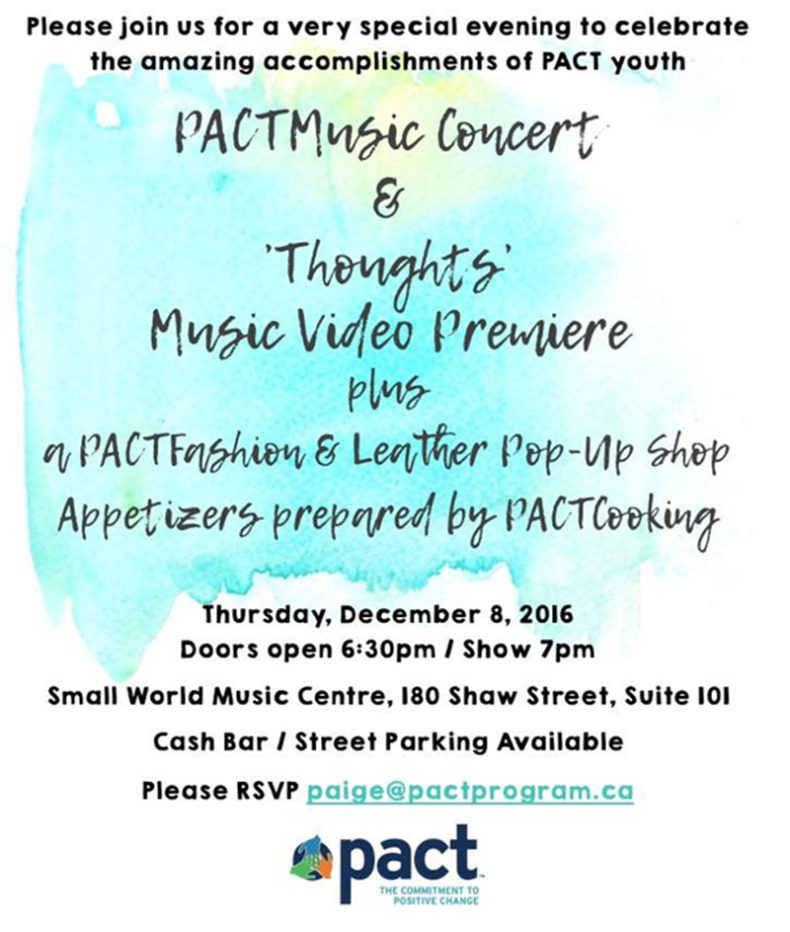 The PACT – Urban Peace Program in Toronto is a charitable organization whose mandate is to provide free life skills and job skills training for at risk youth. Their goal is to stop the cycle of poverty through education, while providing a wide variety of programs, including cooking, fashion design, film, music, as well as gardening. These skills can be applied directly to the work force, and life skills are taught through art.

Erik Schramek is the Director of PACT, as well as a team leader, an instructor and a youth mentor. His team includes music instructors Liana Rose, Christian Bridges, and Bryden Chernoff. The youngest participant in the program is 14, while the oldest is 22. “Skills like being an attentive and critical listener – it’s huge,” says Erik, “we drive it in with this particular focus. Punctuality and being part of a team.”

“Thoughts” is the first song that PACT has taken to the level of professional recording. Songwriting is a big part of the program, and the musical repertoire has been built up over the years. This summer, a music video was produced for “Thoughts,” directed by Philip Nozuka, and produced by J. Mitchel Reed.

The concept of the video was developed with the PACT film program. Philip Nozuka ran a series of film workshops throughout the summer to develop different ideas for the video, getting the youth excited to participate. He reviewed things like mental and emotional space, and communicating ideas. It was an inclusive process that brought a sense of ownership to each participant – exemplifying the PACT foundations.

The Small World Music Centre, located on Shaw Street in Toronto, created a perfect vibe for the event. The hallway was filled with people admiring the youth-run pop up shop, selling goods made by the youth in the PACT fashion program. Refreshments and hors d’oeuvres were prepared by the PACT cooking program.

Audiences attentively listened as the MC introduced the evening , which started off with performances by two of the youth in the PACT music program, Marina and Estella. Marina performed her own original song, “Red Riding Hood,” accompanied by the instructors on keys, drums, bass, and guitar. Estella followed by singing the Alicia Keys tune “If I Ain’t Got You,” blowing away the crowd.

Next up, David Lockett – Founder of the PACT program, spoke graciously about how PACT was founded on unconditional love and kindness. The focus is to provide young people with access to programming, and giving a voice to people who often go silenced. For him, the team effort is the main drive that allowed his organization to grow and become what it is today.

Two songs were performed by eleven youth playing “Electric Feel” by MGMT, as well as their own original song that they wrote in the last eight weeks – giving off some serious funkadelic vibes. Each participant performed a part of the song that they wrote themselves, making it even more meaningful and inclusive. The night was extremely powerful and moving; these young adults truly let their talents shine through – the room was looking bright indeed.