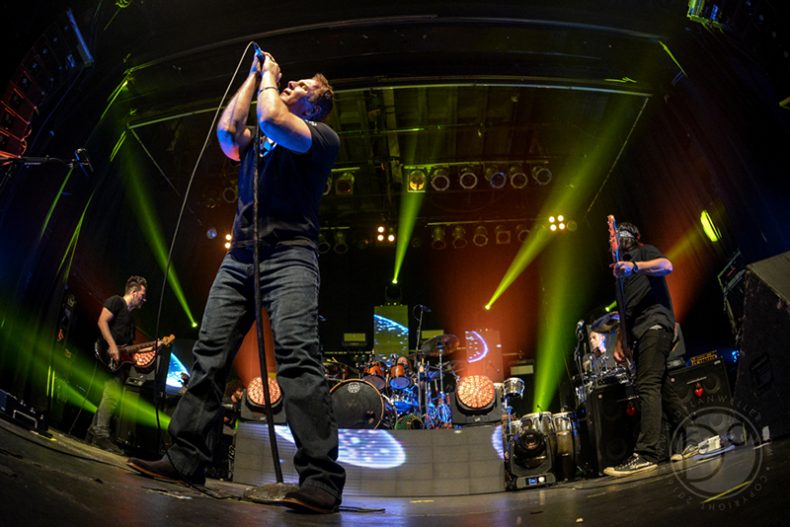 I Mother Earth, celebrating the 20th anniversary of the release of their album Scenery & Fish, packed The Phoenix Concert Theatre in Toronto for what was the first of two consecutive shows, as well as a Canadian tour, that marked their reunion with original front man Edwin. It has been almost 18 years since they parted ways, but you would never have guessed it by the performance the audience was given tonight.  A word of warning – this review may contain an excessive amount of superlatives.  If you can’t handle it, stop reading now.

The irony that their historic “re-debut” took place at The Phoenix Concert Theatre is not lost. This is the third “incarnation” of I Mother Earth, the second rebirth of this iconic Canadian band, and the third time they rise from their own ashes.

The past few months have been a whirlwind for the band. After moving to the East Coast and starting a gig with a local Halifax radio station, front man Brian Byrne and I Mother Earth parted ways, accentuated by his pursuit of becoming the new vocalist for Stone Temple Pilots, as well as deciding to spend more time with another musical project. Fate was on their side, however, as a chance encounter between I Mother Earth’s Jagori Tanna and former IME frontman Edwin was to throw these magical musical forces together once more.

“I was resigned to just believing that there would be no live shows, no big celebration of this record, perhaps not even a goodbye to all of our fans who have invested years and years into this band,” Jag Tanna writes on IME’s website “The Open Mouth Blog.”   Instead of a goodbye, the band has instead experienced a rebirth few bands will ever experience. There had been thoughts on IME’s back burners surrounding a documentary exploring the making of Scenery & Fish, as well as the possibility of a digital and vinyl reissue of the iconic album that saw them part ways with Edwin shortly after its release. A chance encounter was to change all of that, however, and throw the phoenix that is I Mother Earth into one of the most historic rebirths in Canadian music history.

Tonight’s gig was the first of the tour. The show was announced on March 1, tickets went on sale March 8, selling out online in less than five minutes. This prompted the band to add an additional show scheduled for tomorrow night, which also sold out in a matter of minutes.

I Mother Earth came onstage just slightly past the scheduled time of 10:00 p.m., breaking into their instrumental opener “Hello Dave.” They then proceeded to perform the rest of Scenery & Fish in order, in its entirety. Two hours of hardcore, ball busting Rock ‘n’ Roll.  The audience came to see the show of a lifetime, and left having seen just that, and for those of you in the Toronto area lucky enough to have tickets for tonight’s additional performance, the band is stoked and ready to do it all over again.  You better believe they will.

Songwriter and guitarist Tanna is a phenomenal and highly underrated musician. His electric fuzz-infused riffs and extended solos are the heart and soul of what puts together the band’s unique sound. A crafted performer, he belts out chords and tunes from his guitar as if it were a melodic extension of his brain. Let’s not forget the accentuating jumps to the beat of the music, matched in perfect synch on stage left by technical bass wizard Chuck Dailey.

If the guitars are the heart and soul of the band, the percussion team forms its backbone. Christian Tanna on drums is a sight to behold. Simple beats are not to be found here, as his skin technique is sophisticated and complex. Along with über-talented percussionist Daniel Mansilla, they form a superb percussive team, each one complementing the other.

And then there was Edwin. With an almost 20-year gap since he last performed with the band, last night was his first performance – and he was in top form.  “What have you been up to?” he casually asked the audience in his first comment to the IME audience in almost 20 years, eliciting a roar from the frenzied fans. His vocal performance tonight was top notch; there is no denying that. “We should do this more often.”  Yes, Edwin, we hope you do!

IME puts on a superbly physical performance – and yes, the energy is contagious. The audience is a sea during a storm, just a solid wave of motion in time with the beat of the music, drenched in sweat. If you don’t know all the lyrics to the songs, it didn’t matter; you would soon find yourself singing along to the chorus just as everyone else in the packed venue was doing.

“All of us, including you, are part of this crazy partnership and being able to give you guys something that nobody believed could happen, is an absolute honour and privilege for us,” Jag Tanna writes on Open Mouth Blog. True enough, Jag, few of us ever believed we would witness an IME + Edwin reunion in this lifetime, but tonight we did.  The audience walked away tonight from an incredible performance at an historic event.  I Mother Earth’s performance tonight gave your fans reason to believe that Rock ‘n’ Roll will never die, and for that we thank you all from the bottom of our hearts.  😉

Trish Melanson lives in the Toronto area with her three boys, Nicholas, Justin, and Eric, her dog Jakkson, and her cats Max and Jagger. She is the former host and producer of Canadian Kickass, a weekly two hour radio show on New Jersey's Chestnut Radio, showcasing Canadian Music. She is also a former Web Content Manager of Indie Soundscapes, an online showcase for Independent Music Artists Worldwide, and was a regular music contributor to The Stroumboulopouli. She is a fervent supporter of the Toronto live music scene. In a past life she was a teacher and Vice Principal in Durham Region. She has many more new and exciting projects waiting in the wings. ;)
RELATED ARTICLES
edwini mother earthlive review