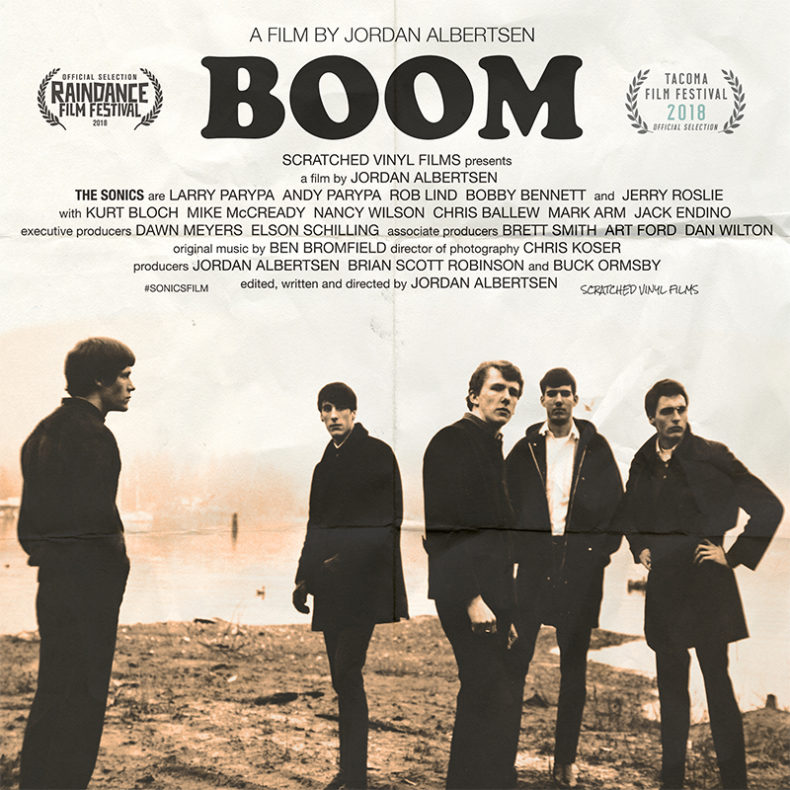 BOOM – A FILM BY JORDAN ALBERTSEN

“Do you know this band…The Sonics?” The answer to this question varies, depending on who you ask. Many folks will give you a shake and a shrug. But if you ask a fan of Rock ‘n’ Roll, Garage, Punk, Psychobilly, Proto-punk, etc., the response will often be a resounding “YES!”.

In BOOM, filmmaker Jordan Albertsen sets out to discover the true story of how an early-1960s Tacoma, Washington-based band became “the most important band you’ve never heard of”, and experienced popularity fifty years after their initial heyday. BOOM reveals how five Tacoma teens – Larry Parypa, Andy Parypa, Rob Lind, Bobby Bennett and Jerry Roslie – formed The Sonics in 1963. Inspired by the sound of popular northwest U.S. bands such as The Wailers and The Kingsmen, and working with local producer/record label owner Buck Ormsby, The Sonics enjoyed regional hits with songs like “The Witch” and “Psycho”.

Making use of archival footage and photos, and band member interviews, Jordan Albertsen creates a strong narrative in this film. Driven in part by wanting to forge a greater connection with his father (who was a fan of The Sonics), and by his intrigue over the band’s unlikely international success, Albertsen takes his audience on a trip that is equal parts history and mystery.

The filmmaker uses the tried-and-true rock documentary method of recounting the history of a band by having members tell their story on camera. While this documentary style is common, the story moves along well, with members of the band weighing in on various aspects and details of The Sonics’ early days. Interviews are interspersed with the requisite early-1960s clips and photos, in addition to commentary from younger artists such as Kurt Bloch of Young Fresh Fellows and Fastbacks, Mike McCready of The Presidents of the United States of America, and Heart’s Nancy Wilson. The history and the testimonials from younger musicians give weight and context to how The Sonics’ efforts and regional success inspired the next generation of northwest bands.

Without giving too much away, Albertsen continues the story of The Sonics in the twenty-first century, investigating their seemingly improbable popularity overseas, as well as their reintroduction to the music scene, in America and beyond.

With BOOM, Jordan Albertsen has created a piece of filmmaking that works on a number of levels, appealing to a variety of audiences. Besides being writer-director-producer-editor, Albertsen also narrates this film in an accessible, everyman style. He engages the viewer immediately, in ways similar to the documentarian Michael Moore. Between The Sonics’ history and their present-day doings, BOOM moves along naturally, bringing the audience along with interest, every step of the way. An interesting film with a bit of a twist on the “rock doc” format, BOOM is a fine addition to the genre.

Musician, writer, and grandad Bryan Williston is a fan of music in all of its forms. He loves to listen to, play, and talk about music, and to share his ideas with others. Despite the failings of humans, he is hopeful about the future, and thinks that Spill Magazine readers are just the best. Bryan lives in Whitby with an assortment of people and dogs.
RELATED ARTICLES
film review