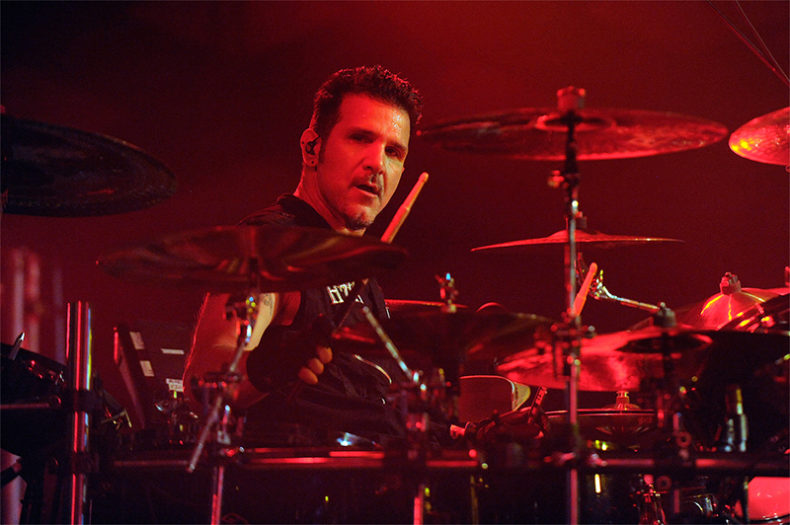 QUITTING IS NOT AN OPTION

Pretty much all Anthrax songs start with Charlie Benante. For their most recent album For All Kings, the band went into the studio with more songs than they have ever had in their career and ended up recording 20 of them. Benante underwent several surgeries for carpal tunnel syndrome which caused him to miss quite a number of tour dates. As a result, he put the down-time to good use, and came up with a slew of basic riffs and ideas for new songs that he took into writing sessions with band mates Frank Bello and Scott Ian. Although he plays drums for Anthrax, Benante does all of his “riff-writing” on guitar. In addition, he designs all of the band’s album art, ads, marketing tools and band merchandise. He’s also the band’s archivist, and if it weren’t for the fact that he’s kept one of everything — artwork, t-shirts, posters, demo recordings, early rhythm track takes, and so on — Anthrax would never be able to release the rich “anniversary editions” that they have been able to release.

Charlie Benante plays a surprising large number of roles in the band. A strong work ethic is something that he has actually gravitated to. Upon joining the band, he quickly realized that no one else was going to do certain things, so he just adapted to those various roles, which he actually enjoys. He attributes the longevity of Anthrax to the fact that the band members actually still feel their work is fun. He feels the band possesses an inner drive that always gets them through whatever situation or predicament arises. He acknowledges, however, that “other bands experience the same types of things too”, but the choice is to continue, or the alternative, to call it a day. Quitting is not an option for Anthrax.

Anthrax’s standing today is as strong as it has ever been, as much as when they were being referred to as one of the “Big Four” of thrash bands in the eighties. Benante recalls feeling that there was a resurgence in early 2000 while they were working on the record which would become “Worship Music”. At that time, he felt that things started to really take shape. The cycle was beginning again, and there were no new bands of quality. A generation began to appreciate more what they had had.

Charlie Benante is responsible for the new series of Anthrax re-releases. This has caused him to re-examine and re-evaluate the band’s musical legacy. About a year ago, he started work on the “State of Euphoria Deluxe Edition”. This presented him with the opportunity to revisit the record and approach it from a different point of view. He felt personally too close to the record when the band first released it. He had previously received a lot of criticism for the album because of certain aspects of it. He felt that it wasn’t given enough time to grow into what he had mentally envisaged. Years later, he was able to approach the album from a different point of view. He was able to enjoy it again, able to listen to it “with different ears”. He admitted to actually shelving it in the Anthrax catalogue as he didn’t think that it was good enough, but with a fresh and new perspective, he would eventually change his opinion. As it was the follow up to the very successful Among The Living, it would always have additional pressure brought to it. He agrees that as it is an album that people hold in very high regard, it is always set up to fail in many people’s eyes. For the band itself, the most important thing is to try to stay consistent over album releases and just do the best that they can do. When Anthrax start making records, they have this momentum as they start to build up their sound. That helped a lot with writing, as they open up different areas which in themselves prove a big challenge.

Although he is Anthrax’s drummer, Charlie Benante actually does all his song composition on guitar. While on stage he is the band’s drummer, off it he is always playing guitar. “If I am just watching something, I have a guitar in my hands, it’s just an extension”. He has also built up quite a collection of guitar music on tape, to which he occasionally returns to explore musical ideas. A natural development would be for Benante to release a solo album where he would be playing guitar. That would be quite a surprise to many longstanding Anthrax fans, and that is definitely something that he would consider now that he is starting to take guitar playing more seriously. Such an album would present a variety of music with possibly several different singers. Remember where you heard that piece of news first.

Certainly, Anthrax’s subsequent achievements have far exceeded what youthful hopes and dreams that they had when the band first started out in New York City. On occasion, when Benante reads an article in a magazine, or views the band’s discography back-back, he has memories of how particular albums were made, or recalls a story from that time. Some things feel like yesterday, even though there have been so many major changes in the industry itself. Albums are actually made differently, and indeed Benante actually feels that the reasons for making them have also actually changed. “Nowadays, I don’t know if the importance is there as much as it once was”. So much time and money go into the creation of an album in order to make it sound amazing, and the outcome is that people just stream it and listen to it through tiny ear buds. Does this mean that music has thus became diluted? Benante feels that people still love music, however Anthrax still have fans who are able to recount personal stories of how their lives at particular times were influenced by the band’s music. It still has the effect of getting people through the most difficult and the hardest of times, however people were also less likely to embrace it and give it its full, recognizable, proper place as important. As for his own life, Benante “is enjoying it as it is”. “I almost feel like I’ve become an adult in the last fifteen years, I feel like I’ve become more of an adult, and certain things that would not affect me, or I wouldn’t give any attention to, now I give attention to.”

Fame has had both its pluses and minuses. As for Benante, he likes to go out and be normal, but also recognizes that to other celebrities, that may prove particularly difficult. Fans are generally respectful and are rarely over-zealous or over-enthusiastic. Musicians today are more accessible, and social media had helped to break down barriers between artists and fans. “Years ago, people put their rock stars up on this pedestal, they could never be touched. Nowadays, it’s easier to touch them than it once was.” 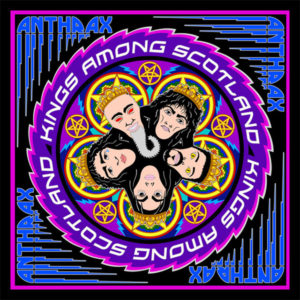 Working as a musician these days there is more of an emphasis on touring. Benante has had issues with carpal tunnel syndrome and adds that something of that nature you do not fully recover from, and it will always be a problem. As a result, he would have to spend less time touring than he did previously and would be able to play less shows consecutively. He doesn’t want to create a situation where he is playing in pain, which would directly affect his performance. Unlike Rush who have quit touring completely, he does not want that to be the case with Anthrax. “I don’t ever want to call it a day, I don’t want to do that.” He recognizes that he will have to follow the advice given to him by medical professionals, and to listen to his own body, in order to continue.

Benante created a lot of the artwork on the Anthrax album, his artistic abilities mostly self-taught. When he was younger, he would spend hours upon hours drawing comic book figures, some of his favourites being Spider-man and The Hulk, and he has thus learned from comic book artists. He attended an art school in New York City, but had to leave when Anthrax started to tour. Over the years he had been able to directly work with the art departments at the various record labels which has been an education to him. He is known as a keen Star Wars fan and collector of memorabilia. Had he stayed true to its franchise after it had been bought over by Disney? Like many of the favourite bands of his youth, such as Kiss, The Beatles and Led Zeppelin, he still retains that collecting bug to this day. Evidenced by his record collection and his sci fi memorabilia. Although Benante feels that in a lot of ways he has finally grown up in recent years, this has proven otherwise. “A hundred percent. I still get excited over silly things, and I think that’s what keeps me young.” He shared a story about bringing his entire Motörhead collection to Lemmy Kilmister. Lemmy, duly impressed, autographed a number of them for him, and the delight in his voice while retelling this story illustrates that despite all the success he has subsequently achieved with Anthrax, he is still just a fan at heart.

I'm a 40 + music fan. Fond mostly of Rock and Metal my staple-musical food delights. Originally from Northern Ireland I am now based in the UK-Manchester. I have a hectic musical existence with regular shows and interviews. Been writing freelance for five years now with several international websites. Passionate about what I do I have been fortunate already to interview many of my all time musical heroes. My music passion was first created by seeing Status Quo at the tender age of 15. While I still am passionate about my Rock and Metal I have found that with age my taste has diversified so that now I am actually dipping into different musical genres and styles for the first time.
RELATED ARTICLES
drummerfeaturesglasgow

by Gerrod Harris on April 1, 2019
FOR MY FRIEND, JEFF A CONVERSATION WITH THE JEFF HEALEY BAND DRUMMER TOM STEPHEN The name Tom Stephen often brings up mixed feelings across the Canadian public and industry. As both the drummer and manager of The Jeff Healey Band he was an [...]

by Lucy Sky on November 29, 2017
WHAT THE FUTURE HOLDS FOR THRICE AN INTERVIEW WITH RILEY BRECKENRIDGE After a four-year hiatus, Thrice has started making waves again with their latest album, To Be Everywhere Is To Be Nowhere. For a band that has always sworn to be loyal to [...]