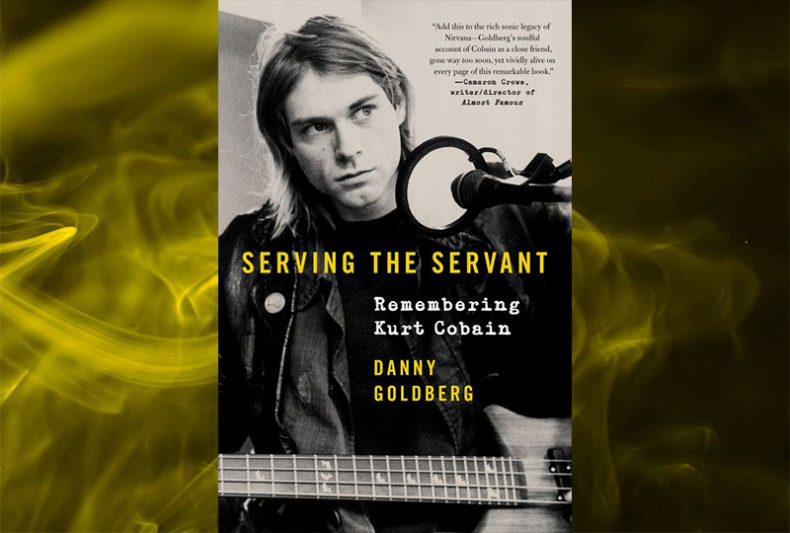 To my knowledge, Serving The Servant: Remembering Kurt Cobain is the only book to emerge from someone from within the official Nirvana circle, let alone someone so integral and close to Cobain. Immediately, Goldberg’s insight is truly invaluable as he often brings forth a new sense and dimension to both Cobain and Nirvana, while also confirming, denying, and elaborating on the thoughts and ideas of other authors who have previously written about the pop culture icon. The authenticity of Goldberg’s word is continually reinforced as he references the work of other authors, media outlets, and primary sources while also conducting his own interviews with those close to Cobain–including Nirvana bassist, Krist Novoselic, Cobain’s wife and Hole vocalist, Courtney Love, and other industry insiders who worked alongside the band–in the last few years. It is largely through these interviews where, even twenty-five years later, the narrative described throughout Serving The Servant: Remembering Kurt Cobain proves to be strikingly relevant.

Throughout the course of his book, Goldberg recounts his first meetings with the band up to just after the passing of Cobain on April 5, 1994. While he certainly explores the cultural impact Cobain and Nirvana sparked across the globe since then, Serving The Servant: Remembering Kurt Cobain largely focuses on the post-Bleach/pre-Nevermind  period to the end of the band. Highlights among this naturally include the making and unexpected breakthrough of Nevermind in 1991, Cobain’s relationship with Love, and the making of 1993’s In Utero. As he discussed at a speaking engagement in Toronto a few weeks ago with Alan Cross, Goldberg has not set out to write a book’s worth of new and shocking truths which have been unearthed from his position behind the scenes. Rather, he wanted to paint a picture of the Cobain he knew as both his friend and client. Goldberg simultaneously depicts the conflicting nature between Cobain’s punk ethos and his ambitions whilst continuously parsing his sheer brilliance and work ethic as an artist.

Ultimately, Goldberg’s humanization of Cobain is what makes Serving The Servant: Remembering Kurt Cobain such a thrilling read. Anyone who enjoys literature about music should read this book while it is an essential read for any Nirvana fan. Goldberg’s focus on Cobain and his personal relationships, art, and music in contrast with the shifting landscape of the music industry and building pressures and controversies surrounding the band as they changed the course of popular music and culture seemingly overnight makes Serving The Servant: Remembering Kurt Cobain a truly indispensable resource and among the most important illustrations of Nirvana and Kurt Cobain.

Danny Goldberg is president and owner of Gold Village Entertainment, an artist management company; former CEO and founder of Gold Mountain Entertainment; former chairman and CEO of both Mercury Records and Artemis Records; former CEO of Air America; and frequent contributor to the Los Angeles Times, The Nation, Huffington Post, Dissent, Billboard, and many other outlets. He is the author of In Search of the Lost Chord, Bumping into Geniuses, and How the Left Lost Teen Spirit, and co-editor of It’s a Free Country. Goldberg has worked with a wide range of artists, including Led Zeppelin and Nirvana.

A passion for music has always been a part of Gerrod’s life. As a young boy, he was raised on a steady diet of the music from The Chili Peppers, Aerosmith, The Stones, Prince, and others from his mum. Raised in the GTA, Gerrod continued to foster his love for music by attending a wide range of concerts and learning the drums. His unapologetic passion for music has no bounds and has spread to a wide variety of styles, whether it be the 90’s rock that sound tracked his teenage years, the jazz he studied in university, or his newfound love for hip-hop. He recently received his bachelors in music and education from York University and is passionate about writing and reviewing good (and less than good) music. Gerrod is also the drummer and songwriter for a Toronto based rock & roll band, One In The Chamber.
RELATED ARTICLES
booksin bloomkurt cobain