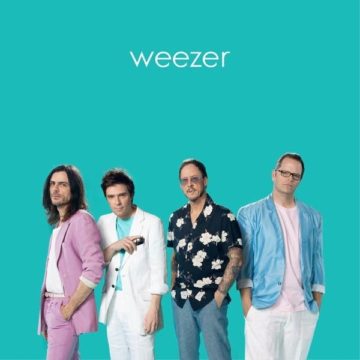 Weezer can play a knockout cover but that doesn’t mean that The Teal Album, a collection of iconic and shamelessly-picked classics, is predictable. On ten tracks of lighthearted fun, Weezer approaches many of the cheesiest songs in existence. On the opener, Toto’s “Africa”, Weezer injects their signature ‘90s guitar amongst the cloying keyboard and heavily-produced drumming. These covers, which are generally similar to the original versions, successfully convey the same sugary themes. Tears for Fears and The Eurythmics’ “Sweet Dreams Are Made of This” receives hi-fi treatment, confirming Weezer’s appreciation of ‘80s pop. Winding the clock back to the ’60s, Weezer take on The Turtles’ iconic hippie anthem “Happy Together”, on which they sound more like the punchy guitar band of their previous albums. Despite The Teal Album’s obvious irony, the hi-fi production and savage vocal sheen on Black Sabbath’s “Paranoid” suggests nothing but reverence for the godfathers of metal. Like Weird Al Yankovich, Weezer is a band of finely-tuned musicians capable of bringing its own interpretation to other artists’ work. The Teal Album includes no half measures. On “Billy Jean”, the geeky garage band confidently tackle the King of Pop’s biggest hit, producing a version that oozes with as much respect as humour. On The Teal Album, Weezer delivers an outright hilarious choice of ten faithfully-executed classics for an overall colourful experience. Teal is the colour of a band having pure, shameless fun.

The Spill Magazine is a Toronto-based online publication dedicated to covering the independent music scene with a strong focus on our thriving hometown talent. Our writers bring you up-to-date news, in-depth features on musicians and reviews for the latest CD releases. We also travel to the front lines for all local festivals including Canadian Music Week and North by Northeast. Don’t forget to check out our Facebook and Twitter pages for all daily Spill updates.
RELATED ARTICLES
album reviewalbum reviewsatlantic records
8.0