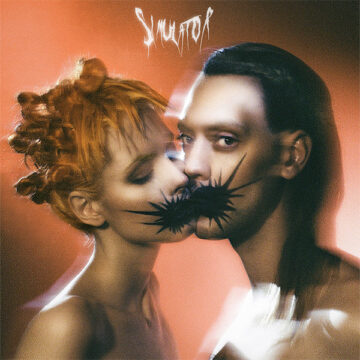 UNI & The Urchins were originally known as Uni, and under that name, they released several singles over the last couple of years. The band is composed of Jack James Busa (vocalist) and former member of Ghost Of A Saber Tooth Tiger (GOASTT), Charlotte Kemp Muhl. Together they make a very unique style of rock ‘n’ roll, kind of 1960s psychedelic meets grunge meets electronica. But, this description does not do the band justice. They utilize interesting sound effects, keyboards, and anything else to make their music. And to their credit, this album, their debut, does not include all of their old singles as Uni (although putting those together on an album is not a bad idea). Instead, fans are treated to ten brand new songs. Some of the songs have preceded the album, but the older singles are nowhere to be seen on the album.

Simulator is an album of twists and turns. “Popstar SuperNova” is 1980s Eurobeat at its best, while the opening track, “Subhuman Suburbia” is psychedelic rock at its 2023’s finest. And that is just two of the songs on the album. “Dorian Gray” is a bit reminiscent of Erasure, but again, it has the UNI & The Urchins flair, and “Amazing Grace” is a cover of the classic hymn, done, of course in the UNI & The Urchins distinct style. They treat the song quite seriously and it actually works as an electronica song.

In listening to the album, there is no way to second guess where the band is going with each track. In fact, when the song starts, one never knows what the song may morph into. The duo are quite capable of shifting and adapting different styles. This is a unique and brilliant talent. The duo work together well and have produced ten very interesting and well performed songs. It is worth noting, that as good as Busa is as a vocalist, Muhl has a wonderful voice and is highlighted in one song, “COVID’s Metamorphoses”. It is a great song to begin with but Muhl’s voice and her interaction with Busa throughout makes one wish she had taken the lead vocals a few more times.

Lyrically the album is dark and full of stark imagery. Everything comes together with Simulator. The band works together as a unit and Busa brings a great deal of character to every song. Although the band has been around for a while, Simulator is an impressive debut.

Born and raised in Whitby, Aaron discovered music through his love of The Beatles. This led to a career in radio, writing for various publications, and ultimately a radio show about The Beatles (Beatles Universe), which ran for over four years. When not immersed in music, Aaron enjoys spending time with the loves of his life -- his wife Andrea, and daughters Emily and Linda (all of whom have an intense love of music too).
RELATED ARTICLES
album reviewalbum reviewschimera music
8.0