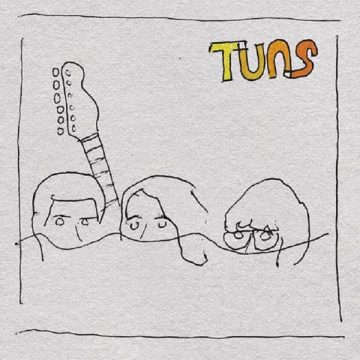 Formed in 2015, Tuns is comprised of Mike O’Neill of The Inbreds, Chris Murphy of Sloan and Matt Murphy of The Super Friendz. The idea of a supergroup, where successful artists in their own right collaborate and go on tour together, is not new.  Groups such as Cream, Emerson, Lake and Palmer, Asia and more contemporary outfits such as Them Crooked Vultures have experienced great success. This phenomenon appears to experiencing a renaissance in Canada, with the creation of Tuns and the Trans-Canada Highwaymen, of which Chris Murphy is also a member.

The name Tuns is a reference to the Technical University of Nova Scotia, a tribute to the group’s east coast roots. In fact, all three members of Tuns were part of the Halifax pop explosion in the 1990’s and the debut album recalls their heydays but also sounds incredibly fresh and upbeat.

Tuns opens with a melodic and cheerful statement, “Back Among Friends” which establishes the tone for the rest of the album. Bright guitar sounds and an energetic backbeat are featured on strong pieces such as “Throw It Away” and “Mind Over Matter” and even a song entitled “Lonely Life” cannot dampen the spirit of Tuns.

The album was recorded live with only guitar solos and vocals mixed in.

The band’s first performance was only one month after formation, during Hayden’s Dream Serenade at Massey Hall in October 2015 but the group now has a solid album to promote and share with audiences.

Tuns are currently on tour in Canada during the months of October and November 2016.

An educator who also tries to introduce others to great music. It's a never ending job.
RELATED ARTICLES
album reviewschris murphymatt murphy
7.0