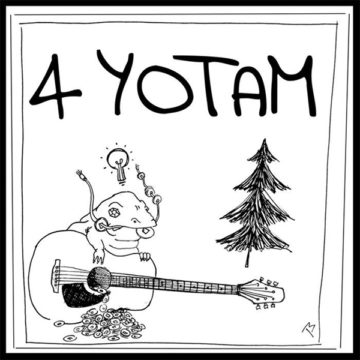 Trevor Burnett is an artist born and raised in Montreal. However, he has spent the last few years travelling the world. While travelling, it would seem that Burnett was working on his writing and music. 4 Yotam is his debut release, although he has released tracks in the past under the name The Swan.

4 Yotam is an EP of five songs written and played by Burnett. This is a do it yourself recording, guitar and vocals. Calling his music ‘folk’ simplifies the music. Burnett is an artist and he uses various mediums to create. Here he uses music as his canvas and has created six pieces. This is not traditional folk, a guitar and singer does not make a folk singer. If anything, this is punk-folk or folk-punk.

With the exception of “Dirty Stinkin’ Artist”, which is quite funny, all the songs have a lot of lyrics jammed into the song. This is not a distraction, quite the opposite. Much like Phil Ochs, the listener becomes entrenched into the song wondering where Burnett is going next.

Burnett is an engaging artist. It is not often that an EP is the perfect length, but here, as a debut disc, it is a great introduction to Burnett. This EP will not be for everyone’s taste, but if you want to see what one man and a guitar can do, this is a great place to stop and listen. I would like to see Burnett in a studio with a more structured production and see what comes from that. In the meantime, 4 Yotam is a a great way to start.