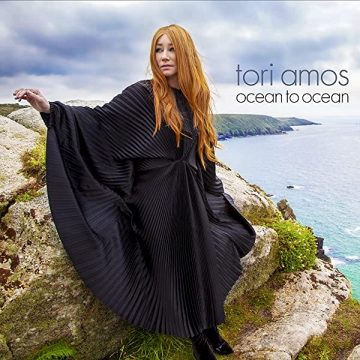 Ocean to Ocean is Tori Amos’s 16th studio album. It is her first album since 2017’s Native Invader, although she did release a Christmas themed E.P. (Christmastide) last year, as well as a best-selling book, Resistance.

Amos has stated that the album is “a record about your losses, and how you cope with them”, which is a very apt description. She has always been very honest and expressive with her music and lyrics. The opening verse in the first single from the album, “Speaking With Trees”, states : “Speaking with trees/Speaking of my grief…I’m almost sure/That they are grieving with me.” It sums up the theme of the album. She may be talking of her own personal loss, but she is also empathizing with her listeners. And in many ways, it is, perhaps, her most personal album in many years.

In Amos’s albums, there is always more going on, and she is able to utilize the musical arrangements and instruments to get her ideas across. Working with drummer Matt Chamberlain and bassist Jon Evans for the first time in ten years allows her the comfort of playing with musicians who know and understand her vision. Her husband and collaborator, Mark Hawley helping with production, guitars, and mixing is the perfect combination for Amos.

She has always had the knack for writing incredible melodies, but  the string arrangement and layers of “Swim To New York State”  is perfection and hits the listener like an emotional ton of bricks. The music and lyrics hit her listener with such peaceful force that one is almost left breathless. It is pure genius. However, she saves the best for last, closing the album with “Birthday Baby”. After a beautiful piano introduction, she opens with “This year you survived it all”, over a very sparse piano, horn, and drum backing. Then the strings come in and the chorus soars into the listener’s ears. The song is sublime. And she tops “Swim To New York State”.  Two of her best ever songs on one album!

As good as her last few albums have been, here she has outdone herself. In looking within and expressing her pain, she has made  Ocean To Ocean engaging, beautiful, and moving. At this point in her career, she has nothing to prove, but it just may be time to rediscover the genius of Tori Amos.

Born and raised in Whitby, Aaron discovered music through his love of The Beatles. This led to a career in radio, writing for various publications, and ultimately a radio show about The Beatles (Beatles Universe), which ran for over four years. When not immersed in music, Aaron enjoys spending time with the loves of his life -- his wife Andrea, and daughters Emily and Linda (all of whom have an intense love of music too).
RELATED ARTICLES
album reviewalbum reviewstori amos
8.0