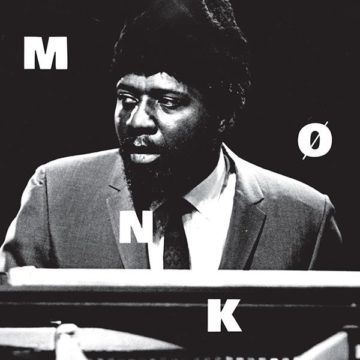 Often considered to be among the greatest of contemporary jazz musicians, Thelonious Monk is an artist in every sense of the word who, needless to say, has truly earned his status as a legendary icon of the genre – held in the same standing as Miles Davis and John Coltrane. Having passed away in 1982, it comes with great surprise, and excitement, that a lost album of unreleased material was recently found. Mønk, in this sense then, is an anomaly – quite similar to Coltrane’s Both Directions at Once: The Lost Album, another collection of recently discovered material that was released earlier this year – that offers lifelong fans a peek behind the curtain at the creative genius of Monk during the early 1960s – one of his many peaks often referred to as his Columbia Records era.

Recorded live in Copenhagen in 1963 with a band that included Charlie Rouse on tenor saxophone, John Ore on double bass, and Frankie Dunlop on drums, Mønk follows the quartet through a five-song set of Monk’s original material along with reinterpretations of class jazz standards, “I’m Getting Sentimental Over You” and “Body and Soul”. Mønk kicks off with the lively up-tempo swing of “Bye-Ya” which features an incredible solo from Monk on the piano. Immediately, Mønk serves as an unnecessary reminder of Monk’s genius and contributions to jazz. His ability to write seemingly simple and catchy tunes that anyone can enjoy; however, underneath they remain rhythmically and harmonically as sophisticated as ever. While Monk was one to truly push the envelope in terms of the possibilities and expectations of jazz giants, he was also an expert in making the genre feel accessible to anyone. His reinterpretation of his bebop classic, “Nutty” is no exception.

As Mønk continues, Monk performs a highly emotive solo piano introduction in “I’m Getting Sentimental Over You” and then lays the foundation for Rouse to lay out a stellar sax solo. Over the course of the album, it is clear that Monk was truly working with a tight and well-rehearsed band of artists who could also be considered masters of their craft. Quite similarly, the closing track, “Monk’s Dream”, captures the band in perfect rhythmic harmony as they take the push and pull of the track’s head with ease and a beyond natural flow. Monk’s take on the standard, “Body and Soul”; however, stands as the strongest track on the record. The song showcases a solo Monk as he adapts, embellishes, and indulges himself over the well-known melody in a manner that is nothing short of beautiful and brilliant that once again affirms the listener as to why he is revered as one of the greatest jazz performers and writers in the history of the genre.

Monk has always played the piano with such a distinct style; simply put, no one has seemed to approach the instrument quite like him. With this in mind, I welcome any additional material from a true jazz legend whose legacy is only furthered with the discovery of Mønk. This is an album for any jazz fan, whether you’ve followed Monk’s artistry or not, and can prove to be an education in improvisation within a live setting amongst jazz students – much in the way they hang on every note from the countless classic jazz live albums from the likes of Davis, Coltrane, and Charlie Parker. Mønk is a revival to the jazz of a long gone era, a time when traditional collided with bebop in the late ‘50s and early ‘60s. It is rare to find “new” albums that are recorded in this style- and it is even rarer to find them performed at such a phenomenal quality. It is for these reasons that Mønk is an absolute must hear record.