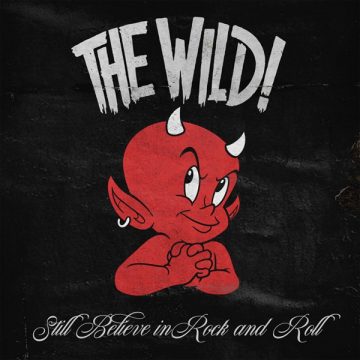 The Wild!
Still Believe In Rock And Roll
eOne Music

Over the course of the last half decade, the world seems to have rediscovered their interest in rock by heralding a number of up and coming champions of nostalgic tones that are beginning to usher in a new age of rock ‘n’ roll. Some, however, did not need a modern phase to rekindle such a spark, such at Vancouver’s very own, The Wild! on their latest full-length album, Still Believe In Rock And Roll.

Opening with the full throttle, Bon Scott-inspired rock on “Bad News”, The Wild! sets the tone for Still Believe In Rock And Roll with a cutting, relentless ‘70s banger that smoothens out a razor edge with catchy songwriting. This is a consistent trait for much, if not all the tracks on the record, but the bluesy, classic rock thrash in tone with AC/DC and Motörhead is especially apparent on “High Speed”, “King Of This Town”, and “Goin To Hell”.

Over the span of Still Believe In Rock And Roll, The Wild! more than prove their worth as an incredibly strong rock band with their latest album. Throughout the stellar track listing, a handful of songs peak above the rest and stand out. The first is a raucous title track, “Still Believe In Rock And Roll”, a hard rocker that is both parts classic rock, as it is modern, as best captured between the contrasting vibes of the relentless verse and the melodic chorus. Immediately following is the lead single, “Playing With Fire”, a track, that if I didn’t know any better, I’d say was pulled straight out of the ‘70s. The last comes in the form of the album’s closing track and sole ballad, “Gasoline”, which truly flexes the band’s songwriting chops with a slow burner that builds organically over the course of its surprising six-minute runtime.

If AC/DC and Buckcherry had a love child, then the bastard would be The Wild!. Still Believe In Rock And Roll is the result of an unrelenting drive that has propelled the band since their inception and demonstrates that a modern hard rock record in 2020 can be both nostalgic and unique. What is most impressive is that The Wild! has delivered an album that captures the high octane and raw energy of their barebones live set and has channelled that vibe straight into the veins of 10 hard-hitting original tracks. Front to back, Still Believe In Rock And Roll is a hell of a ride, one that should ultimately cement The Wild!’s place in the new wave of classic rock.

A passion for music has always been a part of Gerrod’s life. As a young boy, he was raised on a steady diet of the music from The Chili Peppers, Aerosmith, The Stones, Prince, and others from his mum. Raised in the GTA, Gerrod continued to foster his love for music by attending a wide range of concerts and learning the drums. His unapologetic passion for music has no bounds and has spread to a wide variety of styles, whether it be the 90’s rock that sound tracked his teenage years, the jazz he studied in university, or his newfound love for hip-hop. He recently received his bachelors in music and education from York University and is passionate about writing and reviewing good (and less than good) music. Gerrod is also the drummer and songwriter for a Toronto based rock & roll band, One In The Chamber.
RELATED ARTICLES
album reviewalbum reviewseone music
7.0