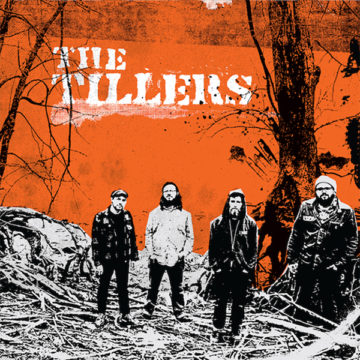 It has been about five years since the Tillers released an album. Their last album, 2013’s Hand On The Plow, was well received and had the band poised for an even bigger audience. Since 2008, The Tillers have toured and spent some time writing. They also built a substantial following. After a lengthy absence, they are back with a self titled album, that in some ways could be seen as a second debut album. The Tillers is an excellent album full of great songs and stunning playing. It is an album that should not be ignored, and once you put it on your player, it is near impossible not to give it your full attention.

The band is comprised of Mike Oberst (banjo, vocals) and Sean Geil (guitar, vocals), who are two of the original members. They are joined by Sean’s brother, Aaron Geil (bass) and recent addition, Joe Macheret on fiddle. This line-up went into the studio with producer Mike Montgomery (Jeremy Pinnell, The Breeders) and basically recorded the songs live to tape.

The result is an incredibly impactful album. This is roots/Americana music played the way it was intended to be played, with tight harmonies, strong melodies and a beautiful spacious sound. Although these guys have roots in punk rock, the music is pure and the punk influence is felt in the energy of the music.

Lyrically the album is stunning. This album is life, family, loss, politics, and work. All areas of life are addressed and in the end no solution is offered, but there is a feeling of togetherness and unity. It is not surprising that the only cover on the album is a song written by Woody Guthrie (“All You Fascists Are Bound To Lose”) as the ghost of Guthrie is felt throughout the entire album. Listen to “The Old General Store Is Burning Down”, an incredible song about progress and the loss of an era. Simply beautiful.

In other songs, Oberst’s wit is felt and heard. The song “Like A Hole In My Head” is both funny and touching at the same time. How life and the business of life can take one away from the important things. “Like a ship out on the sea, I’m tired to the anchor no one’s coming back for me”, later to sing “I should be loving you instead, I need this shit like a hole in the head”

This is the album this band has been working towards. I can only imagine how the songs would sound live. Since the album was recorded close to live off the floor, it is easy to imagine. This is roots/Americana/folk music at its best. The Tillers breathe new life into the genre and in doing so create their own sound. The Tillers is an impressive album, and one that should gain this band a whole new, and large, audience.

Born and raised in Whitby, Aaron discovered music through his love of The Beatles. This led to a career in radio, writing for various publications, and ultimately a radio show about The Beatles (Beatles Universe), which ran for over four years. When not immersed in music, Aaron enjoys spending time with the loves of his life -- his wife Andrea, and daughters Emily and Linda (all of whom have an intense love of music too).
RELATED ARTICLES
album reviews
10