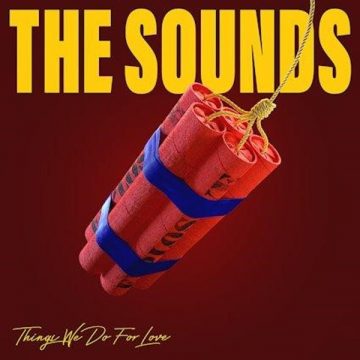 The Sounds
Things We Do For Love
Arnioki Records

This is slick, effective pop. It is powerful, radio-friendly, entertaining, and packed with energy. Swedish band The Sounds have two decades worth of experience to draw from, having formed in 1998 and releasing their first album in 2002.

The Sounds have not been prolific musically over the years, and this is the first album since 2013’s Weekend. Here they bring back the power of their first album; so much better than recent albums relying heavily upon keyboards. The guitars are more to the fore here, and the beat delivers track after track. Title track and lead single “Things We Do For Love” gets the album off on a good pace and sets the tone for what is to come. This track leads with the bassline of Johan Richter and reminds us that this is very much a band, one that moves with all wheels and not just a background for distinctive lead singer Maja Ivarsson. There are many highlights here in an album that finds the accelerator pedal and doesn’t take the foot off.

A personal favourite is “Dim The Lights”. “I take what I want when I need it” is the message here in which the beat both rocks and has you dancing at the same time. The drum sound is urgent on this track to beat out the rhythm and keep the focus. It is not all power pop, the band diversifies into a ballad, “Changes”, that is moody and resets the pace.

Overall, this album finds a band that is really comfortable with itself and its sound. If you like a rock/pop mixture, or rock with a dance beat thrown in, then this is one for you. The band is a tight and accomplished live outfit, well worth checking out.