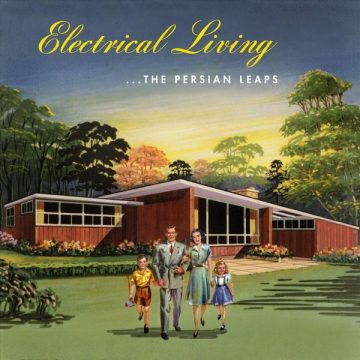 The Persian Leaps have put something out each fall since 2013, and just as sure as the leaves will change and everything turns pumpkin-spiced,they are back with 2019’s offering, Electrical Living.

The opening three tracks are brief but punchy rock songs with simple guitar shifts, thumping drums, and catchy, easy lyrics that set the tone for most of what follows on the album. Several tracks on the back half also fall into this description, and while they all feel somewhat familiar, they still manage to provide a solid power-pop experience.

The standout tracks here are typically longer in length, and more varied and experimental relative to the sort of tracks mentioned above. They reveal a band with more intricate sonic territory to explore should they decide to.

The fourth track, “Sweet Nothings,” is the first one to break out of the mold set by the openers.Dipping into surf punk at times,it incorporates more unique sounds all while keeping the power-pop core intact. Other tracks like “The Problem Is” and “When Can I See You?” also provide respite from the simpler designs that make up the rest of the album.

The lead single “About Your Record” is another standout, and certifiably ear-wormy. It showcases the unique vocals of the lead singer, who manages to evoke an ‘80s, Morrisey-like vibe on some of the slower-paced tracks but is otherwise subsumed by the drum and guitar on many other tracks.

Overall, there is a firm rock base here. The indierock influences of the ‘80s and early ‘90s are threaded throughout the album in a way that straddles the associated sounds of each decade. While my preference is for the longer and more varied songs, I can’t deny that the punchy, driving rock songs had my head bobbing. The Persian Leaps have managed, like clockwork, to put out another solid, enjoyable album.

Dan Kennard is an English teacher and fiction writer living outside Kansas City, Kansas where he lives with his wife and children. More about his work can be found at amazon.com/author/dankennard. You can also follow him on Twitter and Instagram @kennardistry or contact him at kennardistry@gmail.com.
RELATED ARTICLES
album reviewalbum reviewsland ski records
8.0