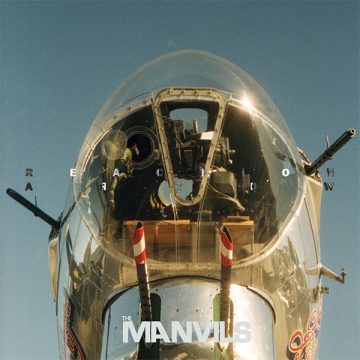 Toronto-based indie power trio The Manvils have gifted us with their exciting new album, Reaction Arrow, and it is nothing short of great.

Recorded over a three-year period in California and Toronto, Reaction Arrow was created in the wake of several deaths within the band’s family, following their relocation to Toronto from Vancouver in 2011. The result is a highly emotive and diverse suite of songs, dedicated to the memory of those loved ones who have passed.

Right out of the gate, The Manvils have you where they want you, leading off with the rhythmic motif of “Sudden News”, which sounds like it has been going on forever. Singer-songwriter-guitarist Mikey Manville’s delivery alternates between melodic vocal pondering and plaintive wail, bringing home all the emotion. With steady driving from drummer Jay Koenderman and bassist Jason Skiendziel, it is obvious from the outset that this band is just so damn tight. That first song sets the tone for the rest of the album, which is filled with variety. There is no shortage of rhythmic changes and turnarounds, and the fuzz-laden guitar work is full, fluid and creative.

In terms of tagging their sound, to my ears, The Manvils evoke the best aspects of bands such as Modest Mouse and (to a lesser degree) The Arkells. However, there is deep originality and creativity within these sonic influences. The Manvils’ songs are densely layered, both lyrically and musically, with hooks in all the right places. The dramatic build and well-placed guitar parts of “Soft Shoulder”, under Manville’s urgent vocal, work well. Similarly effective is the hypnotic intro to “Zoo Bombs Away”, which lulls the listener into a state of serenity ahead of the full band arena rock assault. There are so many strong songs, and the moments of excitement and surprise go on and on.

Treat your ears, people. Reaction Arrow is a stunning recording from an excellent band. This album deserves to be huge.

Bryan Williston has been involved in music since he was a young child. A veteran singer, songwriter, and music educator, Bryan has enjoyed playing a multitude of musical genres in a variety of outfits, over the years. Bryan lives in Whitby, Ontario.
RELATED ARTICLES
album reviewalbum reviews
9.0