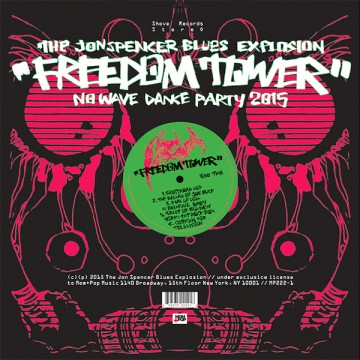 “C’mon fellows, we’ve got pay respect!” Jon Spencer howls on “Funeral,” kicking off the Blues Explosion’s second post-hiatus LP. After 2007, the Jon Spencer Blues Explosion went their disparate ways, taking on side-projects and scattering throughout the cosmos. They reconvened after a series of successful live shows to record Meat + Bone in 2012.

Spencer’s call to “respect” feels like an odd reminder for a band that has forever deconstructed popular music into a mélange of sonic subversion. Dirty guitar driven blues, hip-hop, 70’s funk with a patina stripped from the 1980’s noise bands like Einstürzende Neubauten and Swans. The ultimate Jon Spencer song features all of this influence wrapped in one genre-bending package. This opening barrage on Freedom Tower recalls the opening moments on Now I Got Worry, arguably their best and most defining record, albeit with immediately lesser results.

A great Jon Spencer record immerses the listener in a whiskey-soaked dive bar, smoke lingering in the air since 1994. The thermostat stuck on muggy as hell. A guy named Craig sits at the end of the bar and talks about dredging junk from the river and calling it art. He smells like your drainpipe. The bar band overloads their amplifiers, but not before drinking their payout for the gig. Freedom Tower teases a return to that rancid dive, but never quite reaches the destination, instead redirecting for a club with clean bathrooms on the right side of the tracks.

Not that Now I Got Worry or Orange wasn’t an exquisitely orchestrated symphony of noise, but neither felt pre-planned. Freedom Tower excels when Spencer foregrounds his hip-hop lyricism (while still backed by the two-ton blues riffs). Spencer taps into Chuck D for “Wax Dummy,” and the Beastie Boys, Kurtis Blow, and the Sugar Hill Gang on “Funeral” and “Tales of Old New York: The Rock Box.” The connection to these crate-digging hip-hop acts of the 80’s makes perfect sense. These early hip-hoppers sampled everything they thought would push the boundaries of their genre. Spencer pulls from all of these same influences without sampling; the Blues Explosion has always been their own best crate of dusty vinyl.

Jon Spencer, guitarist Judah Bauer and drummer Russell Simins just aren’t the same youths raging against industry labels and genre restrictions, wailing and wading through an album of bygone sounds. The latest album features songs that could soundtrack a purposeful but leisurely walk through the grime of the cityscape. The late B.B. King famously crooned (surely an inspiration) “The thrill is gone,” and while the visceral thrill of turning a new Blues Explosion up to challenge your speakers’ upper threshold has perhaps subsided, Freedom Tower succeeds because the Jon Spencer Blues Explosion hyperbolic, driving energy still refuses to be pinned down after all these years.

James David Patrick has a B.A. in film studies from Emory University, an M.F.A in Creative Writing from the University of Southern Maine, and an honorary Ph.D. in bullshitting about everything else from the College of Two Pints. His fiction and non-fiction has appeared in PANK, Monkeybicycle, Squalorly, Specter Lit, and Bartleby Snopes among other wordy magazines. While he does not like to brag (much), he has interviewed Tom Hanks and is pretty sure you haven't. He bl-gs about music, movies, and nostalgia at thirtyhertzrumble.com and runs the James Bond Social Media Project at thejamesbondsocialmediaproject.com. James lives in Pittsburgh, PA.
RELATED ARTICLES
album reviewsjon spencermom + pop music
8.0