SPILL ALBUM REVIEW: THE GUESS WHO – THE FUTURE IS WHAT IT USED TO BE 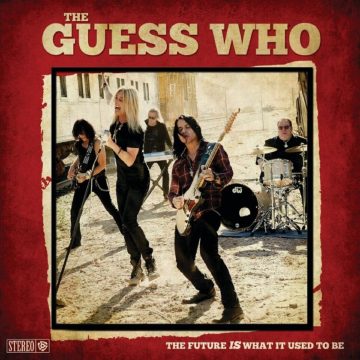 The Guess Who IS still the Guess Who only because this 2.0 version has drummer Garry Peterson, the only founding member. Perhaps for a moment, before passing judgment, one must strip away the actual Guess Who name and give their ears and eyes a chance. No, it’s not the OLD Guess Who, but this album is certainly worth a listen.

The opening track, “When We Were Young” can sound like The Sheepdogs with a dose of Crosby Stills and Nash harmonies. This has a nice touch with guitars playing through Leslie speakers (here and throughout the album as well). I’m now hearing a pleasant ’70s sound of The Raspberries in lead off single “Playin’ On The Radio”. I can hear psychedelic harpsichord tones towards the song’s end but there are also McCartney like bass lines happening here, thanks to new member, the one and only Rudy Sarzo. He comes from a whole different musical community, making his start in the late ’70s playing with Quiet Riot, Ozzy Osbourne, and later Whitesnake, while each of these artists were at key points in their respective popularities. One can take a minute to try to grasp the reason that Sarzo is here, but once the song starts, its makes good sense, and sounds great. It does not sound like classic Guess Who but rather more like Tom Petty, The Who, Free, Kenny Loggins, and lots of Cheap Trick — but it works.

“In America” follows the tradition of The Stones and The Faces. Singer Derek (D) Sharp, born in Thunder Bay, Ontario, can deliver some bang on Rod Stewart vocals (which does not surprise me as his wife, Sass Jordan can do the same). “Haunted” has the piano and key changes in a place where ‘Elton John’ is close by. “Good Girl” and “Long day” sound like Jethro Tull and Van Morrison respectively.

That’s enough name dropping but it should keep you up to speed, and ease the apprehension that what is happening here is a bit of everything ’70s but no sign of the Guess Who. Not in the music. Not in the band image found on the cheesy album cover. No Randy Bachman. No Burton Cummings. Nada. But whoever is financing this enterprise has a chance of seeing a return on this album. A whole new sound, but nicely done.

SPILL ALBUM REVIEW: THE GUESS WHO – THE FUTURE IS WHAT IT USED TO BE