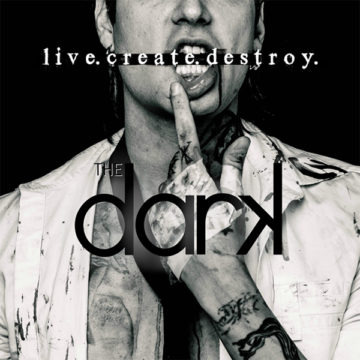 The Dark was formed in Los Angeles in 2015. The band is the brainchild of Brandon Ashley who is the leader of the band. They recorded their debut album, Live. Create. Destroy. in lead singer, Ashley’s studio in Berlin. He also engineered, produced, mixed and mastered the album. Quite a  feat for the guy who also sings, plays guitar and wrote most of the album.

Although this is a debut, it sounds like an album by a seasoned performer. The music has its roots in 1980’s synth rock, and in fact, Christian Eigner of Depeche Mode guests on one track, “Product”. That is not to say the album is retro, far from it, but the use of synths and the melodic nature of the songs harken back to mid 1980s Gary Numan or even Nitzer Ebb.

Ashley has a great voice, which adds to the overall sound of the project. It is sometimes buried in the mix, which is a pity, as he does provide strong vocals, and even stronger lyrics. The sound of the music is dense, however, so sometimes it mixes together to make a heavy wall of electronic sound.

The music is relentless and is quite aggressive in lyrics and music. This is not synth pop, this is hard electronica. Ashley has a lot to say about the state of the world and his mind and this is set to some of the hardest music a synthesizer can produce.

The Dark’s first singles are not included on Live. Create. Destroy., which is a pity as they have recorded a stunning version of Tori Amos’s “Crucify”, and well worth searching out. As it is Live. Create. Destroy., a great title and quite descriptive of the album, is a great debut. I think Ashley will continue to grow and this is a brilliant starting point.

Born and raised in Whitby, Aaron discovered music through his love of The Beatles. This led to a career in radio, writing for various publications, and ultimately a radio show about The Beatles (Beatles Universe), which ran for over four years. When not immersed in music, Aaron enjoys spending time with the loves of his life -- his wife Andrea, and daughters Emily and Linda (all of whom have an intense love of music too).
RELATED ARTICLES
album reviewsbrandon ashleythe dark
8.0