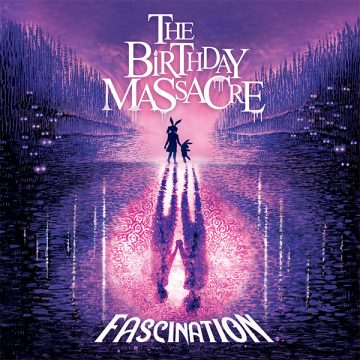 Toronto natives The Birthday Massacre are back with their 12th studio album Fascination, an offering that is full of the dreamy synth pop and aggressive guitar blend that their fans have loved for the past 20 years. This new release promises to be a much more intimate look into the band’s inner workings.

Fascination as a whole is a fine album but what it doesn’t do is re-imagine the wheel. This new collection of songs will bring fans what they’ve come to expect from The Birthday Massacre, music that is fantastical and filled with whimsy topped off with lead singer Chibi’s signature youthful voice.

There is ebb and flow within the album with down tempo tracks followed by more upbeat and happier ones with keyboardist Owen’s great synthesized tones weaving throughout paired with solid guitar work from lead guitarist Falcore and rhythm guitarist Rainbow.

The title track “Fascination” kicks the album off much like their previous releases; it sounds exactly like what is expected from a Birthday Massacre album. Not to say that it’s a bad song, it isn’t. It’s a very pretty song with a great beat but it’s also predictable.

The biggest standout would have to be “Cold Lights” for a song that is on the darker end of the Birthday Massacre spectrum. It’s grittier and emotive right from the start and features a great bass line that is just infectious – it has similar elements that made their track “Superstition” from their prior album of the same name such a hit.

Another highlight would be “Like Fear, Like Love” again for that deeper, darker, heavier tone throughout. It’s danceable, sure to be bound for the DJ catalogue.

Fascination fits snugly amidst the rest of the Birthday Massacre discography. The music here sounds like what they have released in the past and as a fan, there isn’t anything not to like. It would be nice to see them dive into their heavier rock centric side akin to what they did with a classic from their early years “Blue” that also featured Chibi changing up her vocals for a more guttural demon voice to contrast her usual bell-like clean vocals.

Samantha is both a writer and a fan of the arts and has been able to find numerous ways to pair the two. Eager to dive head first into writing for Spill, Samantha is an avid partaker and reviewer of live art in Toronto serving as an editor at Mooney on Theatre exploring live local theatre, she's a photojournalist for Go Globehopper, a travel, dining and tourism blog that focuses on Toronto and abroad and previously for Lithium Magazine. She's passionate about music, theatre, photography, and writing -- not necessarily in that order. She drinks tea more than coffee, prefers ciders over beers, and sings karaoke way too loudly. You can follow her on various social media including Facebook, Twitter, and Instagram.
RELATED ARTICLES
album reviewalbum reviewsdreams of you
8.0