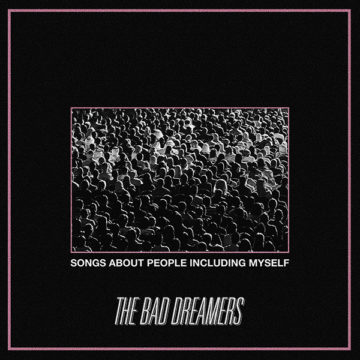 The Bad Dreamers
Songs About People Including Myself
FiXT Neon

David Schuler (producer of P!nk, John Legend and The Backstreet Boys, to name just three) is The Bad Dreamers, that is to say, this is his project. He wrote, mixed and produced the entire album, with one exception, “The Meaning of Life”, which was co-written with Nikal Fieldz. Songs About People Including Myself is his debut album under the name “The Bad Dreamers”, and for this album, he takes a step back into the 1980s, embraces the sounds, music, and production, and he has created a great album. He has also come up with one of the best album titles in years.

Musically, this is the 1980s: the big drums, the keyboards, the echo, everything. He has also captured the strong melodies of the era. In terms of production, it is flawless. He knows when to mix in the guitar (listen to “Who To Run To”) and when to focus on the synthesizers. He has studied the format and has achieved that sound.

What makes this album so great are the songs. While being retro, he has also created remarkably melodic and accessible songs. One listens to this album, and it burrows into your brain. This, to me, is the trademark of quality pop music. Songs About People Including Myself opens with the catchy and brilliant “California Winter”, and that launches the album.

Lyrically, this is not a political album, but a personal album about relationships and Schuler’s observations. He knows how to write. Songs such as “The Meaning Of Life” and the brilliant closer “What We Think Vs. What We Know” show Schuler moving into a more sociological view and they work. On “What We Think Vs. What We Know”, Schuler writes: “Hold my breath in shallow water/Waiting patient for the tide/Hard to tell now if I’m drowning or waiting to get baptized.” This is just an example of his ability to use words. Quite a stirring song, this is not so much 1980s as just solid pop music writing, using sounds and vocals very effectively.

This is a great album full of fantastic songs. At times Schuler seems to be channeling Howard Jones, but do not let that throw you. And while it may be retro, it is as current as anything out there today. It is just nice to hear great  pop songs.