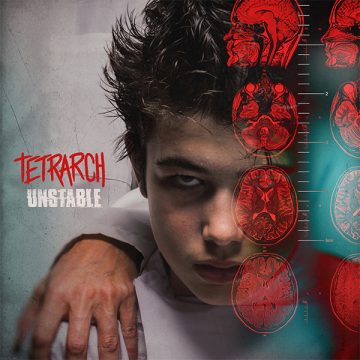 You better sit up and take notice of the Atlanta-turned-LA-based band, Tetrarch, as they have only begun to make themselves known. The highly anticipated, and well worth the wait sophomore album came out swinging, pummeling its way through the airwaves.

Lead single “I’m Not Right” caught the attention of metal heads all over the universe, blasting through the metal scene and grabbing an even bigger fan base. They followed up with the empowering “You Never Listen”, also releasing a powerful video to go with it, only gaining momentum.

The album is heavier than their previous work, and they took a perfect approach by embracing the underdog, making this whole album sort of an outsider’s anthem. The anti-bullying feel to “Pushed Down” and “Sick of You” gives the listener what they need to punch back in a world that is sick of people pushing people around. “Unstable” delivers a message to those people that “if you come at me/just remember I am unstable” and “you won’t get in my head/you won’t get me”.

Diamond Rowe has been making a name for herself in the guitar world as the first African American female lead guitarist in heavy metal to be featured in media publications, and she shows her fierce, raw talent, proving herself throughout the album, through to the end with the eerie but powerful “Trust Me”.

The album is outstanding, both lyrically and musically.

Melinda is a music enthusiast from the US who grew up on vinyl in the 70s and 80s. She's a lover of all genres, but rock/metal runs through her veins. Music is always in the background and in her head. Unfortunately, she has to have a "regular 8-5" job since "Professional Concert Go-er" doesn't pay the bills. Her bliss would be to follow more musicians and bands than "People she may know" on social media. Her ultimate long term goal is to be the old lady just enjoying the show down in front at the barricades at live shows. Her favorite quote is "Where words fail, music speaks".
RELATED ARTICLES
album reviewalbum reviewsnapalm records
9.0