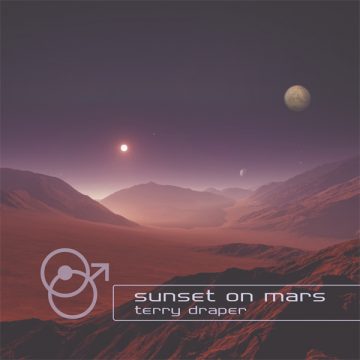 Former Klaatu member, Terry Draper has been very busy of late. Following 2019’s In My Garden, Draper has delivered his best solo album of his career. Sunset On Mars is a stunning album, full of strong melodies and brilliant lyrics.

Whether solo or as a member of Klaatu, Draper has always been fascinated by space, science fiction and good, solid storytelling. Even “Klaatu” has its origin in science fiction, so on Sunset On Mars Draper visits familiar territory, and for this album, he brings everything together. Draper’s worlds collide on this album, the resulting explosion is an album that serves listeners on many levels. It is as political as much as it is a science fiction tale.

Sunset On Mars is a concept album, with Draper revisiting the space theme, but here there is more than an outer space adventure. This album is an alien’s view of Earth, which serves as a warning to how we have destroyed the earth, how our politicians have lied and served big business and our ability to ignore the plight of the planet. There is hope (“The Children March”) but the hope is sparse. The album ends with a brilliant and frightening cover of “If I Only Had A Brain”. A very astute way to end the album.

The album is well produced, beautifully mixed and arranged. Draper takes what could be a simple pop song and turns it into orchestral or even theatrical. In truth, the album could easily be turned into a film or play. However, as it is, Sunset On Mars is a brilliant album. Musically, lyrically and the videos to accompany the songs all work together.

Born and raised in Whitby, Aaron discovered music through his love of The Beatles. This led to a career in radio, writing for various publications, and ultimately a radio show about The Beatles (Beatles Universe), which ran for over four years. When not immersed in music, Aaron enjoys spending time with the loves of his life -- his wife Andrea, and daughters Emily and Linda (all of whom have an intense love of music too).
RELATED ARTICLES
album reviewalbum reviewsklaatu
9.0