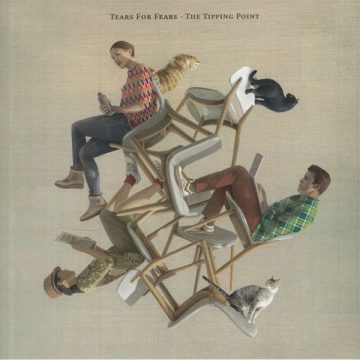 Roland Orzabal and Curt Smith split after Tears For Fears’ third album, The Seeds Of Love. In the early 2000s Orzabal and Smith reunited and in 2005 released the wonderful Everybody Loves A Happy Ending album. After a very long absence from the recording studio, the pair have returned with The Tipping Point.

The Tipping Point is full of incredibly melodic songs, which are lyrically and musically powerful. It sounds like Tears For Fears, but as with their first three albums, it also demonstrates a progression. They are not trying to sound contemporary for 2022, but at the same time this is not a retro sounding album. Smith’s “Break The Man”, for example, is full of layered sounds and beautiful orchestrations. It bursts out of the speakers, and has the band’s trademark vocals but is a reinvigorated Tears For Fears.

Here, the band has broken free of its expectations and has made the album they wanted to make. It opens with the strong acoustic, “No Small Thing”, which builds up to complete chaos. This a brave direction for the band to go. It starts off very mellow but does not end in that manner, much like the album. Later in the album, one is treated to “My Demons” which is lyrically brilliant and accompanied by an energetic pounding beat and great vocal effects.

The Tipping Point is the album we have been waiting for from Tears For Fears. When they split all those years ago, one could not help but feel there was more to come from these two, together. Their solo efforts are fine and enjoyable, but when they work together as they have here, albeit with outside writers, musicians and producers, they create a sound and art that is outstanding.

Born and raised in Whitby, Aaron discovered music through his love of The Beatles. This led to a career in radio, writing for various publications, and ultimately a radio show about The Beatles (Beatles Universe), which ran for over four years. When not immersed in music, Aaron enjoys spending time with the loves of his life -- his wife Andrea, and daughters Emily and Linda (all of whom have an intense love of music too).
RELATED ARTICLES
album reviewalbum reviewsbreak the man
9.0