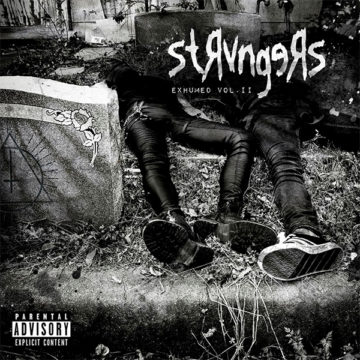 Welcome to the dark world of Strvngers. Strvngers is Maria Joaquin (vocals) and KC (keyboards/vocals) and they have been making music together since 2015. In the last three years, they have released three albums. Exhumed Vol. II is more of an EP of odds and sods, but it holds together remarkably well. Strvngers produce angry, intense, dark electronic dance music.

This EP feels like a stop gap measure. That is not a criticism, especially since there is a lot of new music for fans to enjoy. Some of rock’s greatest albums are stop gap measures (Hatful of Hollow for example). Exhumed Vol. II is comprised of creative covers, inventive remixes and one new song (“Dying On The Dancefloor”).

The covers are both predictable choices (“Closer” originally by Nine Inch Nails, and their take on Korn’s “A.D.I.D.A.S.”) and surprising (“Party All The Time”, originally by Eddie Murphy). The covers work because Strvngers do not try to copy the original version, but treat the song as their own original composition. “Dancing With Myself” (Generation X) sounds new, fresh and quite dark in the hands of Strvngers, and the song benefits from this transition.wand

The remixes are of songs from their album Amor/Noir released earlier this year. The remixes are actually quite good and do put a new spin on the songs, not that there was ever anything wrong with the originals, but here the songs seem to have a bit more depth, added drop in voices and effects enhance the songs, especially “Wanderlust”. Moris Blak takes a turn with “Fetisha” and the song becomes even more chilling than on Amor/Noir.

The new song is perhaps their most commercial and is quite enjoyable. “Dying On The Dancefloor” should be a hit in clubs but could also find a home on radio.

Overall, a great EP. It is a free download, so what more could you want. It does serve as an excellent sampler for Strvngers, and people who enjoy Exhumed Vol. II (there is no Vol. I) will benefit from going back and exploring their previous releases. Committed fans will enjoy the remixes and the covers. Great work.

Born and raised in Whitby, Aaron discovered music through his love of The Beatles. This led to a career in radio, writing for various publications, and ultimately a radio show about The Beatles (Beatles Universe), which ran for over four years. When not immersed in music, Aaron enjoys spending time with the loves of his life -- his wife Andrea, and daughters Emily and Linda (all of whom have an intense love of music too).
RELATED ARTICLES
album reviewalbum reviewsexhumed vol ii
10