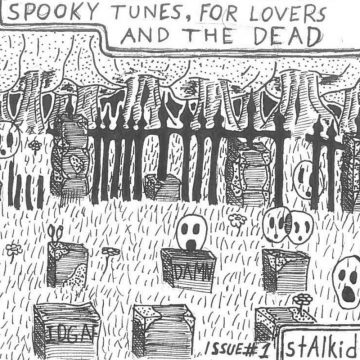 stAlkid
Spooky Tunes, For Lovers And The Dead
Independent

The story goes that Minneapolis’ Roman Non, aka stAlkid was part of that city’s experimental metal/industrial scene. Maybe. Judging by his album Spooky Tunes, For Lovers and The Dead, you would only guess that by a somewhat somber mood stAlkid conjures here. Otherwise, you might get the impression that he actually comes from a singer/songwriter background and he decided to play along with some dark trip-hop with a dash of blues.

On the other hand, titles like “Existential Dread” could give him up. He says that, “we live in a pretty grim time where there are a lot of stressors on mental stability.” If you want to translate that into musical terms, this album could be almost anything on the line between Elliott Smith and The Nine Inch Nails. And by anything, I mean anything.

Dragging in too much stuff into your music could eventually turn it into an unrecognizable mesh. I mean, “My Heart of Stone” sounds like Hendrix in a blues mood jamming with a calmed-down metal singer. But actually, that is a compliment! Then, “Crystal Ball” that follows could be a long-lost Massive Attack demo. And, so goes the whole album.

Still, with all this zig-zagging, stAlkid does create a very personal thread throughout that makes Spooky Tunes, For Lovers and The Dead a very good listen.