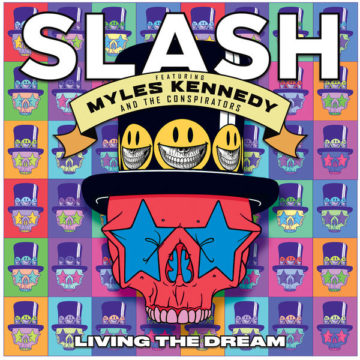 Slash is back from a two year trek circling the globe in his day job with Guns N’ Roses. This new album, Living The Dream, was supposed to have been released a couple of years ago but the anticipated return to the GNR camp was hard to pass up, however Slash always kept this project on his radar.

The start of opening track “Call Of The Wild” briefly gives the impression of new country until a few seconds pass and we are now kicking into full force riffage. Their own sound comes across here, blending together to form a unique identity. Slash played all the guitars on his first two solo albums and this is the first time we get to hear rhythm guitarist Frank Sidoris on the album. It’s uncertain whether or not Slash taught him his parts, but either way, there is a great guitar sound everywhere.

The sonic peals of sound on “Mind Your Manners” could be due to the Pro Tools studio production used for the first time, replacing the apparently aging analogue process. Lead singer Myles Kennedy is coming through in the mix with rich harmonies. “Lost Inside The Girl” has a clean guitar sound with a Robin Trower-esque tone. The lead vocals are dark, and the guitar solo has Slash reaching for notes all over the fret board. The last chorus echoes the “Sweet Child O’ Mine” guitar structure while drummer Brent Fitz is working different grooves throughout. Rounding out everything on the bottom end of it all is Canadian Todd Kearns on bass.

The lead single of the album, “Driving Rain”, is crisp but might have worked out better if it had been recorded in Nashville using analogue. The in and out panning sound found in the guitar solo is refreshing. This single has a nice radio-friendly hook and once again Kennedy is killing it with the harmonies. “The Great Pretender” is a charming slow rocker that has me thinking about Dire Straits and Santana while the same chord structure found in “Boulevard Of Broken Hearts” sounds a lot like Pearl Jam’s “I Got Id”.

Slash makes good use of his time here. There has been talk about a new Gun N’ Roses album in the busy future ahead. Here’s betting Axl had a careful listen here as he is known to be annoyed with band members making solo records and making good songs without his involvement. But now everybody is older and has matured, and we’re hearing good songs again. Slash is good at steering clear of drama and always channels our concentration towards the real deal.