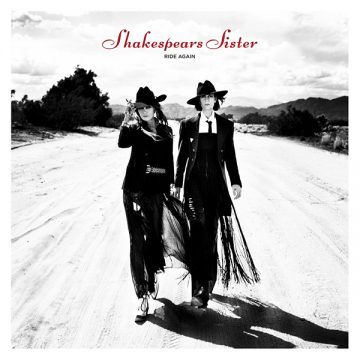 Earlier this year,  Siobhan Fahey and Marcella Detroit of Shakespears Sister announced that not only had they reunited, but they were preparing a tour or the U.K and releasing compilation album Singles Party (1988 -2019). They also  promised more new music by the end of the year. They have kept their word with Ride Again, a six-track E.P., featuring the previously released and now remixed “All The Queen’s Horses” and “C U Next Tuesday”. That means there are three new songs in total for the E.P.

Ride Again opens with “Time To Say Goodbye”, a great opener and a very traditional Shakespears Sister song that sounds like they have never been apart. It has a great melody and their voices blend perfectly. One other new song is my “Dangerous Game”, which is a rocker and allows for Levy to show off her brilliant guitar chops.

The real treat is “When She Finds You”, which features the brilliant Richard Hawley. Hawley contributes beautifully to the song and fits in perfectly with the band. It is a beautiful song that harkens back to the 1960s. It successfully dips into Lee Hazelwood and Nancy Sinatra territory. The accompanying video is one of their best.

Producer Nick Launay has done a fine job with Shakespears Sister. These are some of their strongest songs of their career. My only complaint is that I wish there were more here. It is selfish of me, but these songs are so good that there needs to be a new album. Until then, Ride Again will do, but the promise is there and needs to be fulfilled.

Born and raised in Whitby, Aaron discovered music through his love of The Beatles. This led to a career in radio, writing for various publications, and ultimately a radio show about The Beatles (Beatles Universe), which ran for over four years. When not immersed in music, Aaron enjoys spending time with the loves of his life -- his wife Andrea, and daughters Emily and Linda (all of whom have an intense love of music too).
RELATED ARTICLES
album reviewalbum reviewslondon records
9.0