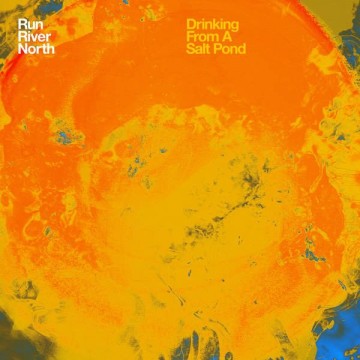 It hasn’t been a very long time since we last heard from Run River North – a Korean-American indie band, formerly known as Monsters Calling Home. Their 2014 debut self-titled record covered a specifically unique blend of genres from mainstream alt-rock to soft, lullaby-like acoustic melodies. The record introduced a band torn between two worlds of influence, stricken with the inability to find a successful balance between humble rock and instrumentally woven folk.

For their sophomore effort, Drinking from a Salt Pond, Run River North has made a decision and stuck with it. The lead single “Run or Hide” should be an indication that the folk-like tones have been abandoned to make way for a much more dedicated approach to alternative rock in the vein of The Killers or Young the Giant. Even those wistful male-female harmonies so powerfully instilled on their debut have no place here. The band clearly displays its fronting man, Alex Hwang, with his airy, yet punk-like vocals carrying well throughout the entire 10 tracks. It is for these reasons that Drinking from a Salt Pond is a much more consistent record than its predecessor. It feels like a whole puzzle, fitting with far more ease considering the array of talents on display here. Somehow, Run River North manages to hold it together the entire time, subduing their eager violins into complimentary instruments, and taking a longer, harder look at their electrics.

The result is a solid, unquestionably strong effort. If there’s any single indication of pure evolution it comes in the form of “Pretender,” whose guitars wind and crank through a brooding, dark fog, drawing up illusions of old horror-film insane asylums. Other highlights include “Can’t Come Down,” an upbeat bop more leaned towards pop-influence, calling “some may stop at the ceiling, I’m gonna fly away;” and the eclectic “Anthony.” Both tracks resemble the debut’s shining “Excuses,” which indicates this direction may be the band’s best bet at stardom. All of this is summed up by the honest ballad “Winter Wind,” which does not fade from memory despite its change in tempo. The way Hwang delicately handles this closer feels far more mature than anything this band has ventured into prior, and it’s clear the lyrics have taken to growing as well.

Harnessing this kind of potential takes some careful maneuvering, and Run River North is almost there. They still are performing slightly under the bar set by the bands they are influenced by, but these sorts of nuances will allow them to continue finding their own sound. With Drinking from a Salt Pond, Run River North has undoubtedly taken a step in the right direction.

Robert Defina is an avid critic both on paper and in person. He spends more time writing album reviews than he does worrying about his future. He hopes that this sort of procrastination never grows old.
RELATED ARTICLES
album reviews
9.0