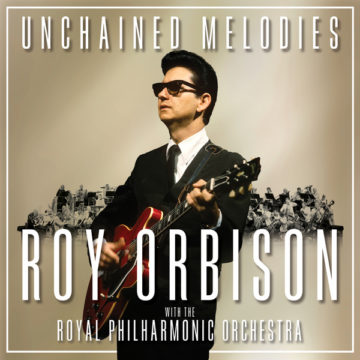 How do you add a greater sentimental feel to music already fraught with emotion? By adding an orchestra, of course! A recent addition to a series of albums which useS archival recordings embellished with symphonic sounds, the Royal Philharmonic Orchestra is once again presenting the music of Roy Orbison.

Following the success of  A Love So Beautiful in 2017, Unchained Melodies: Roy Orbison with The Royal Philharmonic Orchestra takes a slightly different approach from similar projects. On this new album, Orbison’s voice (from his classic recordings) is accompanied by members of his family, as well as by the orchestra. Orbison’s sons Wesley (guitar), Roy Jr. (guitar) and Alex (drums), contribute performances on some tracks. Additionally, his granddaughter Emily Orbison (whose husband, Cameron Davidson, engineered the session) sings backup vocals along with Orbison’s daughters-in-law.

It’s true that producers Nick Patrick and Don Reedman walk a fine line when altering the music of such an iconic performer. The new arrangements serve the music well though, displaying enough restraint and creativity to retain the beauty of the original work, and still give the songs an updated rendering.

There is plenty for the Orbi-phile to love on this album. From classic covers and original songs like “Blue Bayou” and “Walk On”, to late-career Orbison work (Elvis Costello’s “Comedians”, the Orbison co-write with Jeff Lynne and Tom Petty, “California Blue”, and U2’s “Mystery Girl”), this album aims to please. While the formula of giving classic rock and pop recordings the orchestra treatment has become a trifle worn, this team strives to innovate and breathe life into old material.

Bryan Williston has been involved in music since he was a young child. A veteran singer, songwriter, and music educator, Bryan has enjoyed playing a multitude of musical genres in a variety of outfits, over the years. Bryan lives in Whitby, Ontario.
RELATED ARTICLES
album reviewalbum reviewsroy orbison
7.0