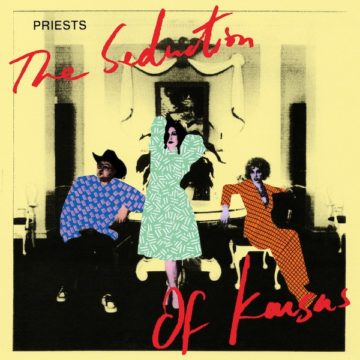 Washington-based Priests returns with its sophomore release, the intriguingly-titled The Seduction of Kansas. Building a reputation for punk-soaked ferocity and memorable live shows, the band has moved towards a more melodic approach to their music this time around with impressive results both sonically and cohesively in terms of the overall impact of the album. Equally as strong is the band’s ability to pull from a multitude of inspirations, sounding at times as comfortable in the off-key quirks of traditional punk as they are in the ‘90s-tinged down-tuning of late grunge.

Though the standout track is album-opener “Jesus’ Son”, a blistering but radio-friendly rock song, there are memorable moments throughout, most notably the lyrically suggestive “Ice Cream” and the shared vocals of “Good Time Charlie”, a politically-charged tale of nihilism and the American dream. New territory is explored on The Seduction of Kansas, most notably the title track and the cleverly named “YouTube Sartre”, but it is in the moments of raw punk and fiery vocals that the album excels. There certainly seems to be some risk-taking lyrically as well, but these are fertile times for lyrics of social upheaval and a band with this clear a punk ethos was always going to be unafraid of speaking their minds.

Priests is part of a growing swell of artists determined to channel their punk roots amidst a host of other down-tuned and heavy influences; this is not a band just riding the wave though, but instead gripping the steering wheel with both hands.

Br. lives in southern Ontario, grew up on The Beatles and The Journeymen, spent his adolescence immersed in grunge, and his adulthood in British alternative. His greatest joy is seeing his son dance and grow into his own appreciation of the indescribable joy of music...
RELATED ARTICLES
album reviewalbum reviews
8.0