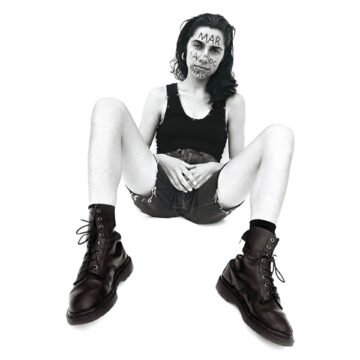 Concealing almost no part of her musical progression, PJ Harvey’s B-Sides, Demos & Rarities provides us with a road map to her as an artist, as well as a person, and spans three decades of growth.

In true PJ Harvey nature, each track is physical, from the gentle drumming in “Who Will Love Me Now?” to the hypnotic build-up of the guitar in “Somebody’s Down, Somebody’s Name”—a live performance of which in 2001 showed PJ Harvey delivering the lines as though they were prose, mimicking the song’s urgency in her own movements and posture.

Longing and grief are both made beautiful when they’re seen through PJ Harvey’s vocals. The song “Rebecca” ponders “Could this be heaven, could this be peace?”, “Memphis”—a tribute to Jeff Buckley says “I’m with you, I’m singing”, while “66 Promises” asks, “Was I not what you thought I would be?” which could really sum up PJ Harvey herself.

Because of PJ Harvey’s capacity to devote all of herself to her latest projects, each work follows a simple trajectory where quality isn’t gauged by a time period. From 1992’s Dry to now, her incessant follow through speaks for itself making her current work some of her best.

The release of B-Sides, Demos & Rarities can be an analogy for the sort of thing you do at the end of the year—you reflect on everything you were, are, and might be, you lay it all out and you move forward.

It’ll come as no surprise to see PJ Harvey doing just that.

Dariya’s a writer, with an obsession for smoked earl grey tea and dissecting song meanings, and believes that most things can be made to sound better on paper.
RELATED ARTICLES
album reviewalbum reviewsisland records
8.0