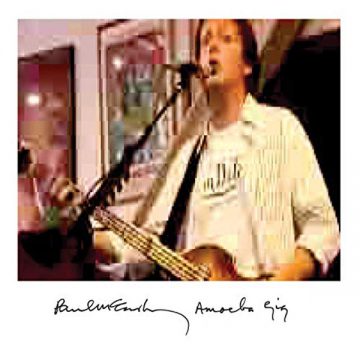 Amoeba Gig is perhaps the most welcome of the four ‘live’ albums in this batch of re-releases from Paul McCartney. Although portions of this concert have been released in the past, this is the first time the entire show has been made available and it has been worth the wait. McCartney performed a ‘surprise’ show at Amoeba records in Los Angeles on June 27, 2007 to promote his then current album, Memory Almost Full. A few tracks were released here and there over he years, but only now do we get the whole show.

It is interesting to note that McCartney has been with his current band (who backs him up on this album) longer than any other band, without member changes. His band then, and now, consists of Rusty Anderson (lead guitar), Abe Laboriel, Jr (drums), Brian Ray (rhythm guitar, bass guitar) and David Arch (keyboards) who filled in on this one show for Paul ‘Wix’ Wickens.

McCartney opens with the classic rocker “Drive My Car” and  goes from there. He dips into The Beatles catalogue for the majority of the show (“Get Back” and “I’ve Got A Feeling” come off remarkably well) and performs some solo material from Memory Almost Full (“Dance Tonight” and “Only Mama Knows are two highlights). He also performs some solo hits. “Coming Up”, from the soundcheck is absolutely wonderful.

The recording is excellent, and it sounds less mixed than any other McCartney live recordings. Unlike his other live albums, this is a recording of one concert. His other live albums are songs recorded throughout the tour, put together as one package. Here, we hear what that lucky crowd (which included Ringo Starr) at Amoeba heard that day. It has the feel of a very well-recorded bootleg, and it is wonderful to have the entire concert. This is a no frills live album, and of the four being re-released perhaps the most essential. It also proves that, like a fine wine, McCartney just keeps getting better with age.