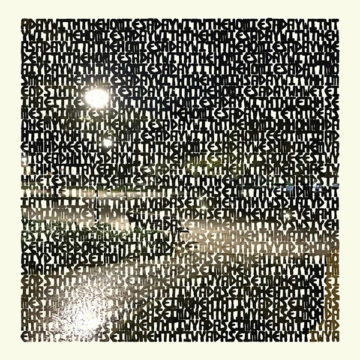 Panda Bear
A Day With The Homies
Domino Records

‘More fluff tends to equal less power.’ The words of Panda Bear (a.k.a. Noah Lennox of Animal Collective) have never seemed truer with his description of his newest EP, A Day With the Homies. The EP comes after the 2015 release and critical acclaim of his album Panda Bear Meets the Grim Reaper. Lennox has since been touring pretty extensively, including a stop in New Haven, Connecticut to do a live recording in May 2017 with Animal Collective. The recording has since been released, with all proceeds going to Direct Relief, a non-profit organization which seeks to ‘improve the health and lives of people affected by poverty or emergencies.’

Now what exactly entails this “fluff” that Lennox is referring to? We take it as his ability to create these immersive atmospheres with only his synthesizer, sampler, and his entrancing voice (with some intermittent guitar use). Noticeably more fast-paced than his previous work, “Flight” starts off the album with an upbeat mood as it brings you right in the middle of a metaphorical field. As my personal favorite of the album, it gave off a sense of summertime chill which was only amplified by lyrics about having a “good crew” and lines like “All Good Wishes to You, All Good Fortune, Fortunate You.” You’re then sent into a tailspin with long guitar notes and fast beats with the track “A Part of the Math” and its lyrics of appreciating the moment and understanding connectedness. It finished us off in a trance with its “Open your eyes” lyric and sections of harmonica.

Fret not, for it’s not over yet. Side B opens to a tempo reminiscent of a train with “Shepard Tone.” Without much of a transition, you’re then thrown into this slow, dreamy feel which then picks up into a steady percussion beat during “Nod to the Folks.” To close off the EP, “Sunset” feels almost futuristic in its extent of experimentalism. Though we admit that we don’t see a connection to the track title in this case, “Sunset” feels less apt of a title.

To have A Day With the Homies be a vinyl-only release made it feel like a shared little secret and we applaud him on the decision. It’s quite true that Panda Bear’s music is also the kind that must be listened to through a good sound system in order to fully grasp the depths of the sound. Overall, though, we’ll admit that we feel unworthy to be reviewing anything by Panda Bear. His music simply feels lightyears ahead of the music of our time. Want to be graced by his presence in person? Panda Bear will be touring this year throughout April and May with a May 2 tour date in Toronto at Phoenix Concert Theatre.

The Spill Magazine is a Toronto-based online publication dedicated to covering the independent music scene with a strong focus on our thriving hometown talent. Our writers bring you up-to-date news, in-depth features on musicians and reviews for the latest CD releases. We also travel to the front lines for all local festivals including Canadian Music Week and North by Northeast. Don’t forget to check out our Facebook and Twitter pages for all daily Spill updates.
RELATED ARTICLES
album reviewsanimal collectivedomino records
8.0