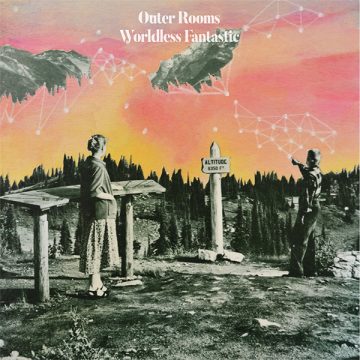 Worldless Fantastic, the first full-length album by Outer Rooms, is brimming with fantastic Punk Rock defiance. The opening track of the album, “Find Lovers,” starts with an exciting guitar line before the vocals rip into you, “We were never young together, we only thought we were.” The vocalist effectively maneuvers between almost trance-like singing and raw emotional screaming throughout the album. His vocal style is infectious and is made doubly effective by the band’s cohesive instrumental sound. “Lindsay Anderson” is a classic get-up-and-yell song. Simple, clear lyrics that just itch to be screamed along with are thrown at you over and over. The band excels on their longer tracks like “Coaster” and “We Can Help You Make Money.” “Coaster,” in particular, gives the drums and guitar a great chance to shine. Beginning with a very quick percussion section the track quickly adds a rhythmic noise effect that knits an interesting backdrop to the music. When the guitar joins in it is delightfully unpredictable, jumping from one riff to another. “The Eighties” is one of the best tracks on the album. Incredible Punk Rock dissatisfaction oozes out of lyrics like, “Just one more thing about failure, it is my favourite social ailment,” and, “I was born in the eights so I know a few things about hating, about hating myself.” The track also features a short but stellar guitar solo. As a debut album, Worldless Fantastic is an accomplishment. There are lots of great tracks but Outer Rooms’ biggest weakness is not giving themselves enough time. In a few places you are left wanting more of something that just happened and has already passed by. That being said, you can’t help but enjoy Worldless Fantastic for the moments of true Punk Rock energy it offers. The title track of the album is almost six minutes of that kind of dissatisfied energy. All the loud, defiant noises you want to make and hear have been bundled up for your listening pleasure. Though this is their first full-length album Outer Rooms have previously released two EPs: The self-titled Outer Rooms in 2014; and a split EP with another group, Terrorista, called Terror Rooms, in 2015.

Daniel Mallett is a young journalist from London, Ontario pursuing a career in arts and entertainment writing. He enjoys music, theatre and visual arts and hopes to learn as much as possible about the artists working in Canada today. Mallett is also one half of the Toronto based folk duo Howl & Other Problems.
RELATED ARTICLES
album reviewouter rooms
9.0