SPILL ALBUM REVIEW: ONE IN THE CHAMBER – LIVE FROM THE ROCKPILE 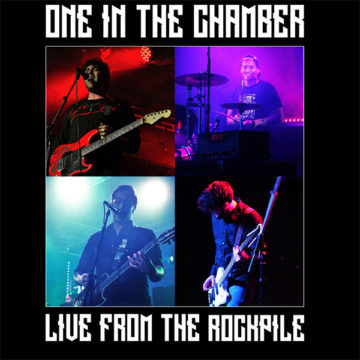 One In The Chamber
Live From The Rockpile
Independent

One In The Chamber is anything but conventional. Their debut EP was a collection of demos (The Boston Session – Bootleg Demos) and their debut mini-album is a live set from two concerts. The more accurate title for this would be Live From The Rockpile and Live From The Opera House, but they set on Live From The Rockpile, which is as good as title as any. The recordings come from a show at The Rockpile (recorded on December 23, 2016) and The Opera House (January 13, 2017). The onstage banter about Metallica being on the same stage weeks prior is wonderful to listen to as it is obvious this band are great admirers of Metallica.

One In The Chamber is a Toronto-based band featuring Mike Biase (lead vocals and guitar), Cecil Eugene (lead guitar and backing vocals, Christian Dotto (bass), and Gerrod Harris (drums and backing vocals). They have been gigging around Toronto and Southern Ontario, and this live release is evidence of their live performance.

Live records are often tricky. While the artist wants to maintain the excitement and energy from a live performance, there is also a need to make it sound as good as possible. Often there is a great deal of studio work done to the live tracks. This is not the case with this album. It sounds like the music comes right from the board with minimal work done to the music.

This is a good thing. This band should be presented as raw, because that is what they are, raw rock’n’roll. They are heavily influenced by the 1980s metal scene, but they are also well aware of the genre as a whole, as evidenced by their cover of Led Zeppelin’s “Immigrant Song”, a brave attempt at a much loved, iconic song. They do it well, with a slight spin of their own. Biase cannot duplicate Plant’s vocals, but he does not need to. He has his own style and it is just fine.

What I like about this live album the choice to include two covers — “ Immigrant Song”, and a cover of Royal Blood’s “Figure It Out”, which is a clear highlight of the album. The band also includes songs not found on their debut EP. “The Ballad of Captain Jack” is brilliant. This makes the listening experience that much better and much more interesting.

The playing throughout is top notch and the vocals are perfect for the music. As with their debut EP, this band presents itself as a very tight unit and a band that clearly enjoys what they play. But as with the their debut EP, this feels like a sampler of what is to come. This band is full of promise and I would like to hear a complete album from One In The Chamber.

Until they release a full length studio album, this will have to do. It is an excellent live album, and another great introduction to the band. It is well worth a listen. Fans of heavy metal and thrash (yes I include them as they do borrow from that genre as well) will enjoy One In The Chamber and their live album, Live From The Rockpile

SPILL ALBUM REVIEW: ONE IN THE CHAMBER – LIVE FROM THE ROCKPILE

Born and raised in Whitby, Aaron discovered music through his love of The Beatles. This led to a career in radio, writing for various publications, and ultimately a radio show about The Beatles (Beatles Universe), which ran for over four years. When not immersed in music, Aaron enjoys spending time with the loves of his life -- his wife Andrea, and daughters Emily and Linda (all of whom have an intense love of music too).
RELATED ARTICLES
album reviewslive from the rockpileone in the chamber
7.0