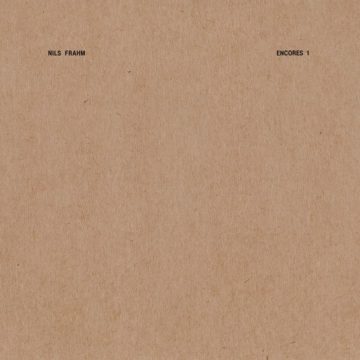 Nils Frahm has released the extended 5-track player Encores 1, the first companion release to his universally acclaimed and currently touring seventh album, All Melody. For those who found All Melody lacking in stripped down, “Frahm-esque” piano works, Encores 1 fills any void in that respect (although, if anything, All Melody demonstrates Frahm’s exceptional musicality and compositional talent away from the piano).

“The idea behind Encores is one we had from before All Melody; to do three releases each with their own distinct musical style and theme, perhaps even as a triple album” explains Frahm. “But All Melody became larger than itself and took over any initial concepts.”

Frahm’s signature grace notes, ostinatos, and the warming acoustic hum and sound of the moving piano keys are heard throughout the four pensive solo pieces of Encores 1. They lead up to the final 11.5-minute harmonium lament, “Harmonium In The Well,” which slowly builds to a fortissimo climax. “Ringing” ends with what sounds like the flick of a lighter, and Frahm inhaling a cigarette before launching into the plodding and steady “To Thomas.” “The Dane” stands out as a favourite on the current world tour with its hopeful and lilting percussive motif.

Well-executed, simple, and profound, Encores 1 leaves a trace of the enigmatic in these piano and harmonium works that will continue this Berlin-based composer’s international acclaim.

“I think the idea of Encores is like musical islands that compliment All Melody,” says Frahm. All Melody was formed from twelve of sixty initial sketches. With that in mind, it sounds like more music could be on the horizon.

Talia Wooldridge is an avid music lover, composer and ethnomusicologist who contributes artist interviews, live concerts, festivals and album reviews for Spill Magazine. She has written extensively on the intersection of music, personal identity and cultural symbolism with an early focus on Latin American Hip Hop and female Cuban rappers. In her spare time, Talia writes, composes music and manages Music Can Heal, a non-profit that brings live, award-winning musicians to inspire healing in hospitals, hospices and communities in need. Her next project is an interactive music-travelogue exploring music cultures and music travel around the globe. Follow her here: www.taliawooldridge.com + www.movetoyourownbeat.com.
RELATED ARTICLES
album reviewalbum reviewsall melody
8.0